This history originally appeared on our congregational site, gerhardinger.org 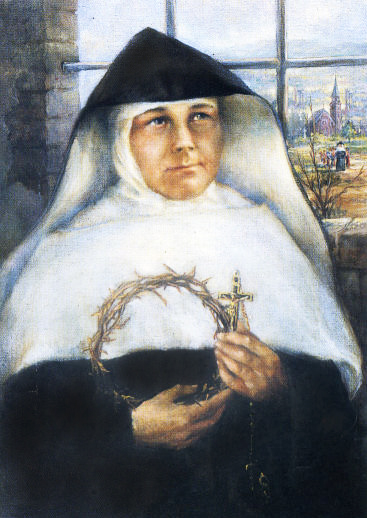 Sister Maria Antonina Kratochwil was born on August 21, 1881, in Witkowice by Ostrawa, where her parents had moved from Węgierska Górka by Żywiec in 1879 to find work. In 1885 they returned, with their children, to the mother’s homeland-Węgierska Górka, and then they settled down in Bielsko.

Sister M. Antonina entered the Congregation in 1901. As a candidate, and later as a professed sister, she was sent to Karwina to teach in a Polish elementary school (1906-1909; 1910-1917). After that, she was sent to Lwów where she was a teacher from 1917-1925. Later (1925-1932) she was local leader, the boarding school directress, and responsible for the candidates, that is, young women wanting to enter the congregation in Tłumacz. She was sent again to Lwów, where she was appointed directress of the school and continued the formation of candidates from 1931-1939. From 1940-1942, she was the local leader at Mikuliczyn.

At the beginning of World War II, Sister M. Antonina was removed from the school in Mikuliczyn, and she and her local community were removed by local authorities from their convent (February 1940-June 1941). On July 9, 1942, together with six sisters, she was arrested and put into prison in Stanisławów. Enduring inhuman conditions (hunger, beatings, tortures, and humiliations) she gave witness to Christian love, faith, and forgiveness; she uplifted her sisters and lay co-prisoners. Five days after her release from prison, weakened by the torture and inhuman living conditions, and suffering from typhus, Sister M. Antonina died.

Sister M. Antonina was a woman of deep faith, a wise and competent teacher, and a wonderful person. Sisters and lay persons who worked with her, unanimously testified that Sister Antonina possessed a boundless goodness and friendliness, a joyful love of her vocation. True serenity and peace emanated from her. She loved children, especially poor and neglected children.

Sister Maria Antonina Kratochwil was beatified in the group of 108 martyrs of World War II by Pope John Paul II, in Warsaw, on June 13, 1999. The feast of the 108 martyrs, including Blessed Antonina, is celebrated on June 12 each year.  We also remember Bl. Antonina on the anniversary of her death, October 2.

Blessed Maria Antonina Kratochwil and the other School Sisters of Notre Dame who were martyred during World War II are patrons of Shalom, which is our International Network for Justice, Peace and the Integrity of Creation. These women religious lived and died because of their faith. Some “disappeared,” some were raped, others were beaten and shot. Today we School Sisters of Notre Dame recognize the significant relationship between their lives and deaths, and all that living Shalom calls us to: to risk all in faith for a more just and truly human world.

They inspire in us a renewed commitment to live Shalom, promote a culture of life, and address the injustices in the world today. With Blessed Antonina we listen to the cries of all creation and we respond in solidarity.