Celebrating Sister Bernice Volk and her 99th year on earth! 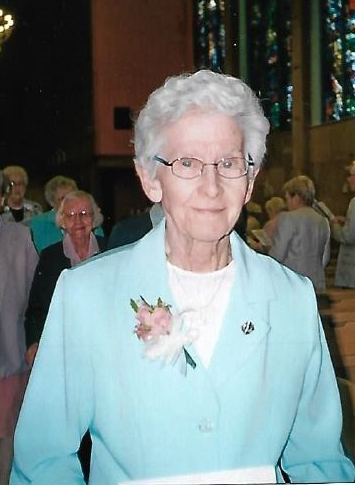 Sister Bernice Volk, slight in stature, is agile and active as she celebrates her 99th birthday this spring.

Sister Bernice was born on March 31, 1920, in Scott, Saskatchewan and baptized Julianne Catherine on the day of her birth at St. Michael in Tramping Lake. Her German father, and her mother from Odessa, Russia, were parents to three sons and six daughters.

Julianne Catherine entered the congregation in the spring of 1935 at Notre Dame Convent in Waterdown, Ontario and professed first vows in 1938. During her 50 years as homemaker, in both small communities and large institutions, she provided tasty and nutritious meals.

According to SSND records, Sister Bernice retired in 1991, although, as many sisters do, she continued her ministry. She visited the sick and elderly for several years at St. Peter in Unity, Saskatchewan, and St. Patrick in Caldonia, Ontario. She then served in pastoral and volunteer ministry before moving to Notre Dame Convent in 2002, where she enjoyed painting with watercolors right up until her eyesight began to decline.