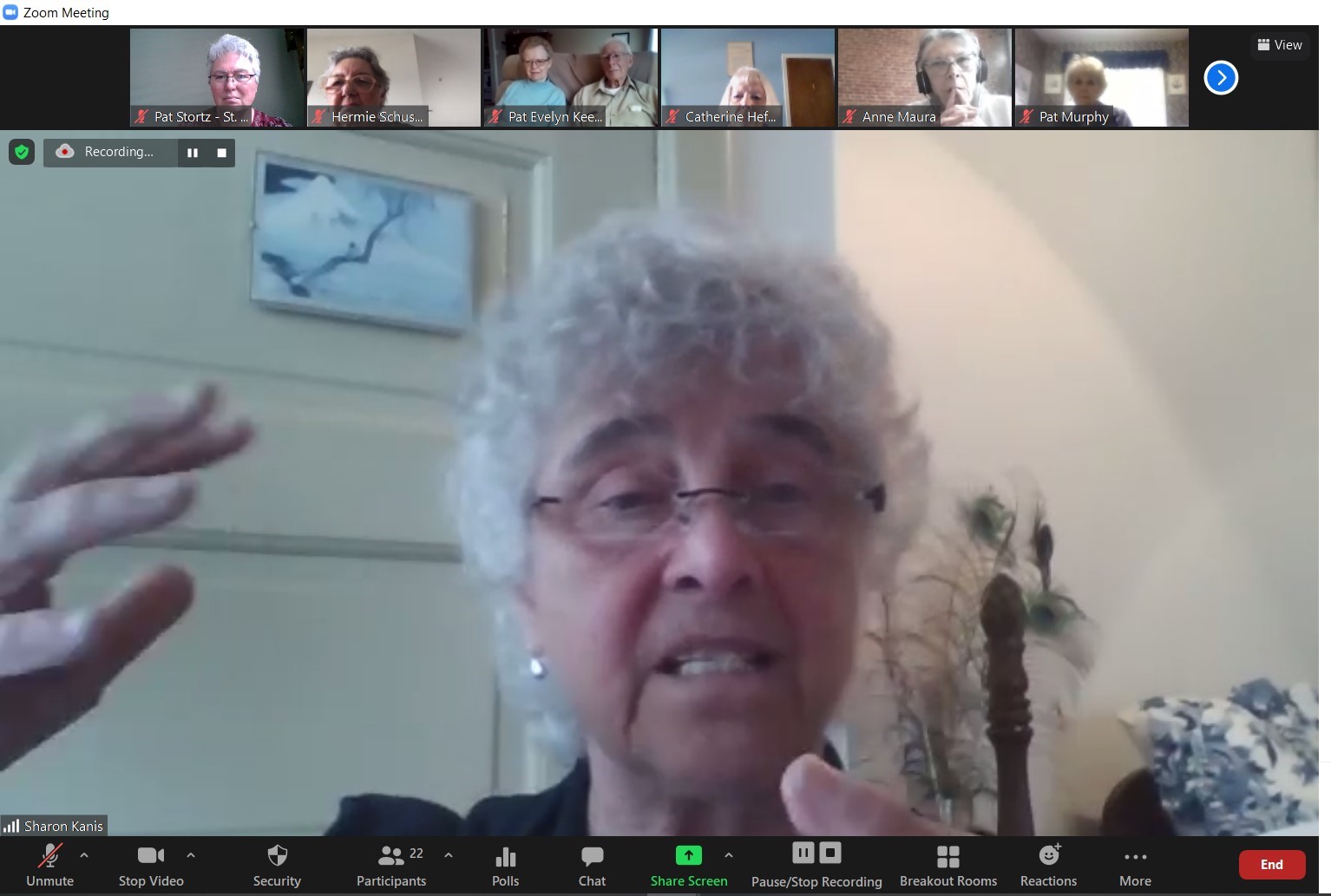 On Saturday, April 10, 2021, the Associates of Southern Ontario hosted a Zoom gathering to learn more about the concept of Cosmology, the topic of the second video in the Integral Vision Video series. Twenty-four Associates and Sisters Zoomed in from around the province including Ontario, Saskatchewan, Maryland, Pennsylvania, Illinois and Florida. Sister Sharon Kanis, Provincial Councilor, led us in a communal meditation/conversation about cosmology.

What do we mean by the cosmos? “A religious mystic may help put us in touch with the cosmos, and so may a physicist.” (Merriam-Webster) This bringing together of religion and science in the dictionary entry was mirrored in Sister Sharon’s own background and in the conversation that followed.

The cosmos is the universe. It includes both outer space and the ground upon which we stand. It is the “world of human experience”. As we grew up, we received messages of meaning, stories, explaining to us how the cosmos works.

For example, in Genesis we read the story of God creating the world in seven days. When did each of us begin to hear a different possibility? When did we hear that a day for God need not be 24 hours? What was our reaction? Denial? Ambivalence?

As our experience of the world challenges our ideas of how the cosmos works, we reevaluate our cosmology. For example, we no longer believe that the world is flat, that the earth is the centre of the universe, and that the world will end on December 31, 1999 (Y2K).

However, change can be slow. Most of us in the West grew up with the idea of the “hierarchy of being” - God at the top, rocks at the bottom, and humans in the middle. This influenced how we related to each other and the world. We believed that the natural world was created for human beings to exploit. Unfortunately, this cosmology has had a devastating impact on the natural world, as well as our human relations. We need to consciously rethink this cosmology.

Science is revealing to us our intimate kinship with all of creation. We are part of the natural world. If we see ourselves in partnership with the universe, where does God fit in? Sister Sharon invited us to let God be God and not confine God to a box. God is creator of all; God is both transcendent and immanent.

“Science tells us that the entire universe is expanding and moving towards greater complexity and greater consciousness,” said Sister Sharon. “And through faith Jesus tells us that we are destined for union – oneness. So how do we take all that expansiveness and become one in the one Triune God? … ‘that they may be one in us.’ Who did Jesus mean by they? Just his disciples, just the humans? All of creation.”

During a time of reflection and sharing we considered the question: How does this understanding affect our prayer and contemplation; how does it affect our action in the world?

The final word was given in the Directional Statement of the 24th General Chapter, Love Gives Everything. "We, School Sisters of Notre Dame [and Associates], direct our entire lives toward that oneness for which Jesus Christ was sent. At this critical turning point in the sacred history of creation and humanity, we have heard our deep desire to trust and dare (YAS, C4)."