69. Together with our obligation to use the earth’s goods responsibly, we are called to recognize that other living beings have a value of their own in God’s eyes: “by their mere existence they bless him and give him glory”, and indeed, “the Lord rejoices in all his works” (Ps 104:31). By virtue of our unique dignity and our gift of intelligence, we are called to respect creation and its inherent laws, for “the Lord by wisdom founded the earth” (Prov 3:19). In our time, the Church does not simply state that other creatures are completely subordinated to the good of human beings, as if they have no worth in themselves and can be treated as we wish. The German bishops have taught that, where other creatures are concerned, “we can speak of the priority of being over that of being useful”. The Catechism clearly and forcefully criticizes a distorted anthropocentrism: “Each creature possesses its own particular goodness and perfection… Each of the various creatures, willed in its own being, reflects in its own way a ray of God’s infinite wisdom and goodness. (Hu)mans must therefore respect the particular goodness of every creature, to avoid any disordered use of things”.

Reflection: “Our unique dignity and our gift of intelligence” make us more responsible for all other living beings, not less. Look at the squirrels, the dogs, the birds, the flowers, the grass, the sky, the river, lake, or ocean and wonder about “the Lord by wisdom (who) founded the earth.” How do these parts of creation call you to prioritize “being over that of being useful?”

Action: Identify one creature of the natural world where you live now and find out more about that creature- its habits, its mating patterns, the food it requires, the habitat it lives in, its natural predators, and the environmental threats it faces. Share your experience with someone else.

Prayer for Ukraine and for Peace 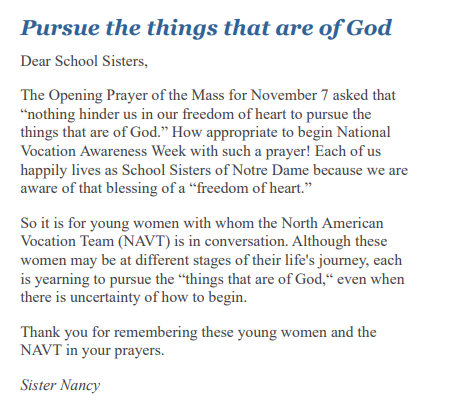 Servant of God Thea Bowman was honored this week at Georgetown, and a chapel named after her. Remember her courage, her witness, her challenge by watching (again) her meeting with the US Catholic bishops in 1989. How long, O Lord, how long?

The Power of Big Oil is a three-part video series on Frontline (PBS). Watch the trailer here, and then watch Part One: Denial here. The threat of fossil fuels to our planet was known and hidden/denied. Plan to watch it with someone or create a group to watch it and discuss it afterward. All three parts are now available.

All change begins with one small step. Commit yourself to reading the Laudato Si’ reflection each week. One paragraph at a time you can stop and reflect on what we are all called to as a Laudato Si’ community!

Monday is the last day to register for the Online Child Exploitation webinar sponsored by the End Human Trafficking committee. Please see the full flyer in the body of the newsletter to register for this webinar on a very important issue!

Watch here to see a short public service announcement video on the insidious nature of online child trafficking. It can, and does, happen across all groups of young people, and changes lives forever.

The lack of a comprehensive immigration policy in the United States is devastating to all those who seek safety. Title 42, a public health policy used since March 2020 to quickly return migrants crossing the Mexico border, was to end on May 23rd. That has now been delayed by a court ruling, a decision that has some bipartisan support. The concerns are that there is no adequate preparation to process the expected 18,000 migrants a day once Title 42 is lifted. In the meantime, people are languishing at the border and in temporary facilities. The Supreme Court also has heard arguments for the end to the Migrant Protection Protocols, better known as the “Remain In Mexico” program, which forces migrants from a third country who attempt to enter the US through Mexico to remain in Mexico while their claims for asylum are processed. There are not enough detention beds to hold those who are waiting for asylum hearings, hearings which are also backed up for years in some cases. We need a comprehensive immigration policy!

Haiti Partnership and Justice for Immigrants

This report, “Pushed into the Shadows: Mexico’s Reception of Haitian Migrants” released last week, tells the story of Haitians directly affected by Title 42 and Remain in Mexico policies. It is a very powerful read that links Haiti, justice for immigrants work, and migration spurred on by ecological and environmental devastation. It is long but very much worth the read.