Words on the cover of the Jubilee booklet, both proclaimed and predicted the spirit of a joy-filled weekend in Wilton on May 4-5. The Atlantic-Midwest Province honored 50 Jubilarians, who ranged from eight Golden to one venerable Diamond, Emerald and Sapphire, Canadian Sister Rita Kittel, professed 85 years.  Spanish, Portuguese, French, English and German words expressed a growing global vision; stars, a forest, water, and the outline of a world map spoke of love for creation to which we SSNDs are called by our recent General Chapter, while its theme “Love Gives Everything” was everywhere spoken and sung, lived and celebrated during every moment of the two-day gathering. The cover was the work of Sister Barbara Valuckas.

Sister Sharon Kanis led a retreat day on Friday, offering a journal she had prepared rich with pictures and words for prayerful pondering. She invited the celebrating sisters to go deeply and peacefully, through reflection, journaling, and sharing, into the three movements of their lives--“We Remember,” “We Celebrate,”  “We Believe.”  Vespers with the Council found Jubilarians singing myriad names for God. A festive supper with champagne and the traditional strawberry shortcake concluded the day.

Many sisters from far and wide had arrived for the Jubilee Liturgy that was live streamed to sisters across our expansive province. Father Tom Elliott presided, and our tech staff demonstrated its usual skills. Several visitors swelled the Jubilee Choir that, besides voices, featured oboe, flute, trumpet, bells, organ, piano and guitar--all under the direction of Sister Charlaine Fill.  “A joyful noise was made unto the Lord” from beginning to end.  Sister Barbara Bowers set the tone with her “Call to Worship,” while Provincial Charmaine Krohe proclaimed the Gospel and gave a spirited homily. Liturgical movement by Sister Rebecca Tayag graced the offertory, as Sisters Maureen Francis Fleming and Eileen Denny brought the gifts of bread and wine to her to be placed on the altar.

Later Sister Charmaine called each Jubilarian to the front to face the congregation while it with deep feeling sang, “Standing Before Us,” its words so appropriate: “. . . these are the women who nurtured our spirits . . .  our mentors, our sisters, our friends.  .  . ”

Paschal Hall’s tiger lily-decorated tables were the scene of a much-enjoyed meal with flowing wine, happy conversations, and background piano music by Villa Notre Dame’s Joey Pisano.  The gift of a cover for YOU ARE SENT, embroidered with flowers by Sister Marie Anna Moltz, and completed by Sister Katharine Lawless, was presented to each jubilarian by name. It came from the council along with a monetary donation made to the Latin America and Caribbean province to support Puerto Rico in the wake of Hurricane Maria. Diamond Jubilarian Sister Claire Czerwiec articulated thanks to all those whose heads, hearts and hands had made the celebration possible, so happy, and so tasteful in every detail, many of them due to the talents of VND staff, Lydia Kakasenko and Danuta Jankowska. Sister Celeste Reinhart who had guided the planning for the council during the preceding months deserved, and received, special gratitude.

Our special thanks and blessings to all who made this community celebration possible for the 2018 Jubilarians! 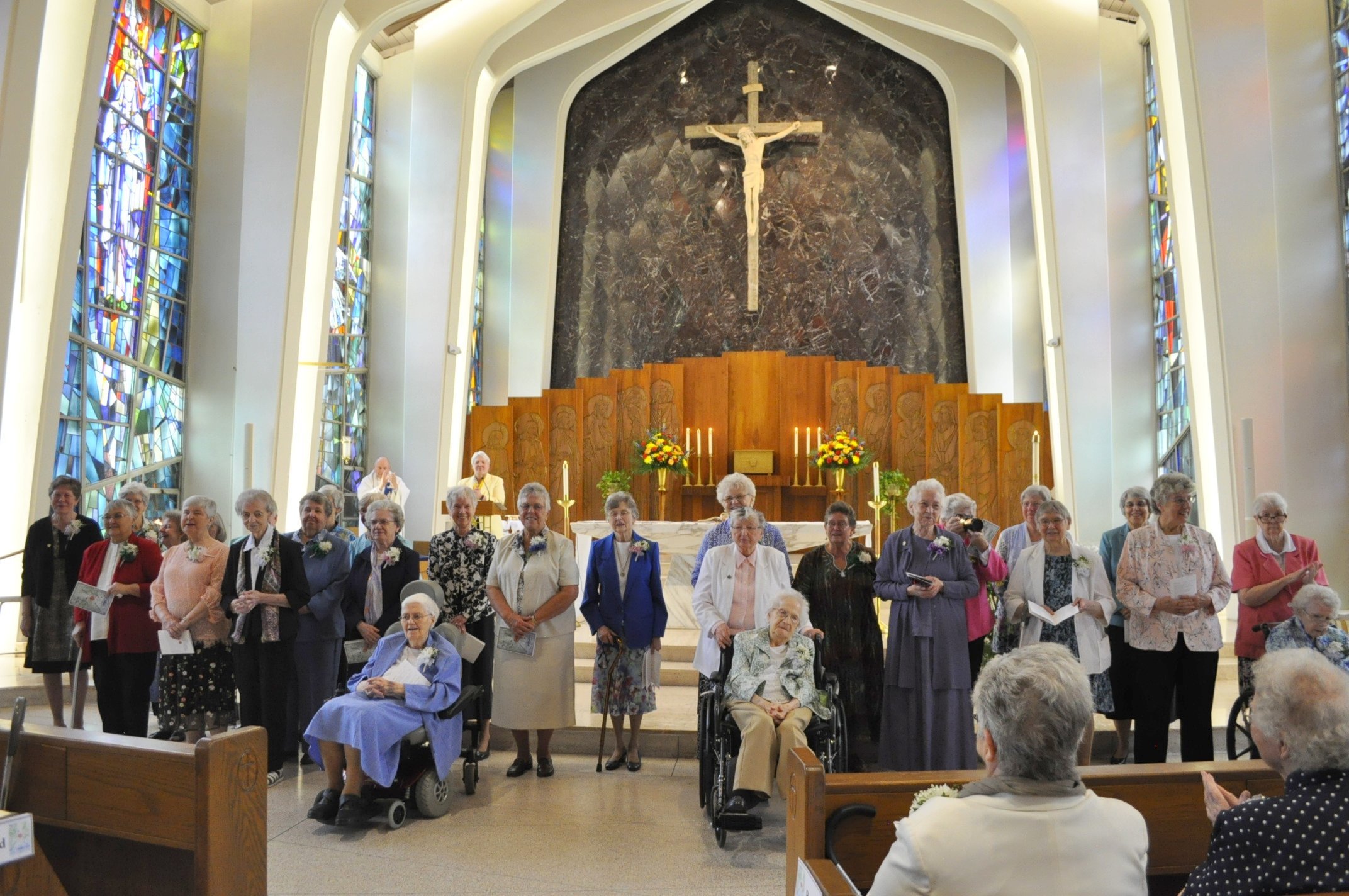