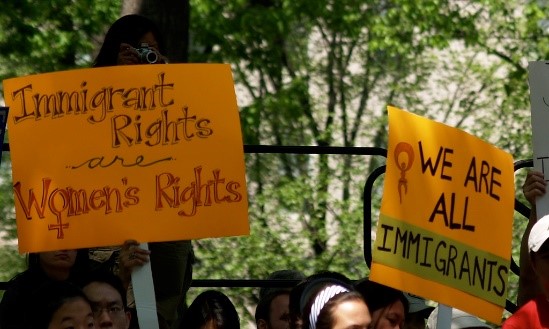 We invite you to watch and reflect on this music video, “Looking for Angels,” which depicts the heartwrenching experience of a grandmother sending her grandson off on the long and arduous journey to the United States to escape gang violence. “Immigration attorney Susan Cohen … wrote the song to shed light on how dangerous life is in El Salvador, Guatemala, and Honduras, where gang violence is rampant, and teenagers who resist joining gangs are targeted for assassination, receiving little or no protection from authorities. … Migrants fleeing for their lives seek refuge in the US because they have heard that the country is not corrupt and that justice is available to all.”

Please also remember to use your Voter Voice to urge your Senators to bring the Dream Act of 2019 (S.874) to the floor for a vote. This bipartisan bill will ensure that the Dreamers in our communities will be safe, stable, and able to flourish. As School Sisters of Notre Dame, "we believe that immigrants are vital contributors to society," and protection for Dreamers is a moral, economic, and cultural good. Join us in urging our Senators to take up S.874 and vote "yes" to protect our Dreamers!

Please continue to pray and advocate for all migrants and refugees.

Wednesday, November 13, the Church celebrates the feast of St. Frances Cabrin!
Mother Cabrini, an Italian immigrant, founder of the Missionary Sisters of the Sacred Heart,
who established schools, hospitals and orphanages in the US and throughout the world.

Immigrants are an important part of our international competitiveness, especially in technology-intensive and service industries. Compared to U.S.-born Americans, immigrants are more likely to hold an advanced degree and are almost twice as likely to hold a Ph.D. Many of our most productive scientists and engineers are foreign-born, keeping the United States at the forefront of global innovation. In 2006, immigrants to the United States played a role in an estimated 24.2 percent of international patent applications. Innovation leads to increased productivity for American workers and eventually a higher standard of living for all Americans.