In her 2008 memoir, IND graduate Nancy Pelosi remembered the house where she grew up and the needy who would gather outside.  It was Baltimore in the 1940s, and the family home in Little Italy functioned as a district office for her father.

“People knew this was where Congressman D'Alesandro lived, and would line up at our door, looking for help," Pelosi wrote.  “It was the same when my father became mayor. Some people needed work. Others needed a bed in City Hospital or housing in the projects. Sometimes they were just looking for something to eat.

“From a very early age, my brothers and I were taught to be compassionate and to be aware of the world around us.”

The first woman to serve as speaker of the House, Pelosi described how growing up in Baltimore shaped her world view in Know Your Power: A Message to America's Daughters.

Central to her childhood, she says, was her Italian-American family’s Roman Catholic faith. Her family - Thomas D'Alesandro Jr., the congressman and mayor, wife Annunciata, and their five children - attended Mass at St. Leo the Great. Nancy, the youngest and the only girl, was taught by the School Sisters of Notre Dame at the Institute of Notre Dame. Her mother dreamed that she would follow them into religious life.

“The curriculum was rigorous and decorum was emphasized,” Pelosi wrote. “In the vestibule of the school was a framed statement that said, ‘School is not a Prison, it is not a Playground. It is Time, it is Opportunity.’ Our Catholic education was shaped by the Baltimore Catechism, and our personal holiness was guided by the nuns, in addition to our parents.”

She describes herself as a typical teenager of the 1950s, wearing blouses with Peter Pan collars and dancing to the music of Elvis Presley. She knew she wasn't meant for the convent. Still, Pelosi wrote, growing up in the church had a greater impact on her than her exposure to politics. “Everybody knows that I grew up in a political family,” she said in a C-SPAN interview promoting the book. “But faith...is and has been a very important part of my family life growing up and now.”

As a liberal Democrat, Pelosi’s stance on some issues has put her at odds with church teaching and conservative Catholic critics. She is in tune with the church on caring for the poor, protecting the environment and disarmament. “So there's some areas where we’re in agreement and some areas where we aren’t,” she said in her book.

Also important to young Nancy D'Alesandro was the H.L. Mencken Room of the Enoch Pratt Free Library back home, which eventually would inspire her to take her first public position, an appointment to the library commission of San Francisco after her marriage to Paul Pelosi. 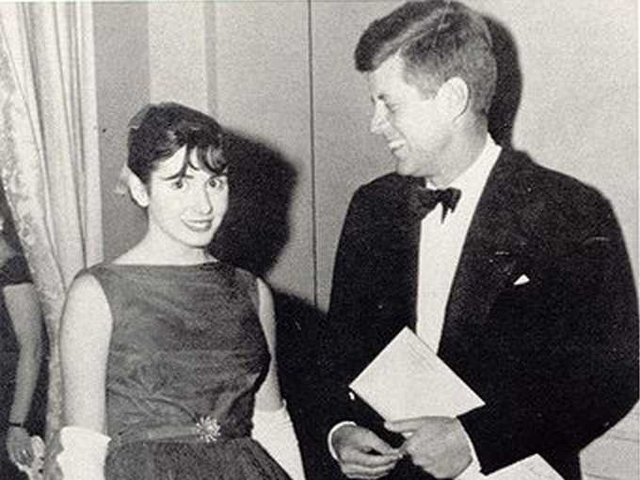 She described in the book her experience meeting Sen. John F. Kennedy at a 1957 dinner sponsored by the United Nations Association of Maryland. She also worked as in intern in the office of Sen. Daniel B. Brewster of Maryland - famously, alongside a young Steny H. Hoyer, a sometime rival who became her top lieutenant as House majority leader. Her brother, Thomas L.J. D'Alesandro III, would follow their father as mayor of Baltimore.

Still, Pelosi says, she had no plans to run for office herself. “I was never on a path to run,” she remembered. “So to go all the way back to when we were 21 years old or whatever in Danny Brewster’s office, I would never have suspected such a thing of me. Steny, certainly, but not of me.”

After graduating from Trinity College in Washington, Nancy D'Alesandro left Baltimore with her new husband, headed for New York. They eventually settled in San Francisco, Paul’s hometown, where she focused on raising their five children.

It wasn’t until early 1987, when Pelosi was 47 years old and had risen from the San Francisco library commission to become a successful campaign fundraiser and, eventually, chair of the California Democratic Party, that she considered leaving her home for a seat in the House. She opens Know Your Power by describing a visit to her dying friend, Rep. Sala Burton, who asked Pelosi to run for her seat.

“Sometimes it takes the encouragement of someone who knows us well to propel us forward in ways we never would have dreamed,” she wrote. In describing her evolution from mother and homemaker to the highest U.S. government post ever held by a woman, she hoped to provide similar encouragement to the women and girls whom she said approach her for “insight and advice.”

“If women can learn from me,” wrote Pelosi, who is poised to become House Speaker again in January, “it will make the honor of being Speaker of the House even greater.”