In Canada in 1976, a five week old Indigenous baby girl, Bridget Perrier, was taken from her parents and adopted by a non-Indigenous family. When she was eight years old, Ms. Perrier was molested by a family friend. Three years later, due to her struggle to cope with the trauma, her adoptive family relinquished her to the Children’s Aid Society, where she was placed in a group home. She was “rescued” from there by a man who exploited her, and she became trapped in a life of sexual exploitation and violence.

Ms. Perrier was one of thousands of victims of the so-called “Sixties Scoop,” the national effort to displace Indigenous children and tamp down their cultural heritage by orchestrating their adoption by non-Indigenous families – often through coercive or fraudulent means. The Sixties Scoop, which occurred from the 1950s-1980s, was a continuation of the residential school program, which also forcibly separated Indigenous children from their families in an attempt to assimilate them.

The United States, too, has engaged in systemic destabilization of Indigenous communities. After the infamous Trail of Tears and other forced displacement, the colonial desire for more land provided the impetus to “remove” Native Americans through forced assimilation tactics, such as forced adoptions and boarding schools, through which the U.S. government hoped to “kill the Indian, and save the man.” Tens of thousands of children were removed through these tactics, leaving gaping generational holes in their communities and thwarting their own psycho-social development.

Throughout North America, Indigenous peoples have been oppressed and victimized since the arrival of European settlers. They have suffered centuries of violations, from their loss of land and its desecration, to physical and sexual violence, to cultural disrespect and forced assimilation. This historical and systemic violence against Indigenous peoples has deeply affected their ability to flourish. The trauma has fostered disproportionately high levels of poverty, substance abuse, and domestic abuse, as well as low levels of educational attainment and dysfunctional family and community relationships – all of which increase a person’s vulnerability to human trafficking. 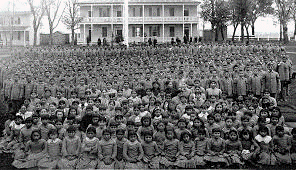 Human trafficking is identified by satisfying the following terms:

The recruitment, transportation, transfer, harboring or receipt of persons, by means of the threat or use of force or other forms of coercion, of abduction, of fraud, of deception, of the abuse of power or a position of vulnerability or of the giving or receiving of payments or benefits to achieve the consent of a person having control over another person, for the purpose of exploitation. Exploitation shall include, at a minimum, the exploitation or the prostitution of others or other forms of sexual exploitation, forced labour or services, slavery or practices similar to slavery, servitude or the removal of organs.

According to the International Labour Organization (ILO), there are approximately 40.3 million people trapped in this modern slavery.  Women and girls are disproportionately affected, accounting for approximately 75 percent of victims. Indigenous women and girls are even more susceptible, due primarily to the pervasive effects of colonial oppression. 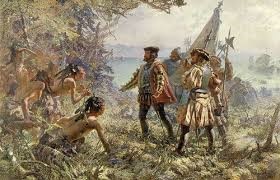 While it is difficult to acquire exact statistics on this under-reported and misunderstood crime, the available research indicates extremely high rates of human trafficking in Indigenous communities across North America: “In a study conducted at four sites in the U.S. and Canada, ‘an average of 40 percent of women involved in sex trafficking identified as [Native American] or First Nations,’ yet Native women represent 10 percent or less of the general population in the studied communities;”  and other Canadian research shows that “Indigenous women and girls comprise only 4% of the Canadian population, while the literature reports that they make up 30% to 70% of [trafficking] victims.”

In addition to these disproportional rates of human trafficking, Indigenous women across the continent also “experience violent victimization at a higher rate than any other U.S. population.” In the U.S., for example, “More than 1 in 3 Native American and Alaska Native women will be raped in their lifetime… more than 6 in 10 will be physically assaulted. Native women are stalked more than twice the rate of other women. Native women are murdered at more than ten times the national average. Non-Indians commit 88% of violent crimes against Native women.”  According to Dr. Sandi Pierce, leading sex trafficking researcher and Native scholar, this last fact is nothing new: It is clear that “the selling of North America’s Indigenous women and children for sexual purposes has been an ongoing practice since the colonial era. There is evidence that early British surveyors and settlers viewed Native women’s sexual and reproductive freedom as proof of their ‘innate’ impurity, and that many assumed the right to kidnap, rape, and prostitute Native women and girls without consequence.”

By disrupting the cultural and communal identities of Indigenous peoples, the historical trauma imposed on them has increased their vulnerability to human trafficking and abuse by engendering exactly the kinds of circumstances that put people at risk: diminished communal support, poverty, lack of education, and discrimination are all serious risk factors for trafficking. “These historical events have created cycles of trauma within Indian country. … The stress of these experiences manifests today – across generations. This reality is critical to understanding the vulnerability of today’s Native men, women, and children to sex and labor traffickers in the US and Canada.”

As an institution, the Church has been complicit in this historical trauma. For example, the Dum Diversas Bull of 1452 granted “the Pope’s blessing ‘to capture, vanquish, and subdue the Saracens, pagans, and other enemies of Christ and put them into perpetual slavery and to take all their possession and their property;’” and the Inter Caetera Bull of 1493 “granted authority to Spain and Portugal to ‘take all lands and possessions’ so long as no other Christian ruler had previously claimed them.”  These Papal Bulls formed the Doctrine of Discovery, which sanctioned what we now recognize as terrible human rights violations against non-Christians who occupied land “discovered” by European Christians – notably, the native inhabitants of the land were permitted to be enslaved or killed, but if they would convert to Christianity, they might be spared. This Doctrine of Discovery made its way into international law, and U.S. Supreme Court cases based some significant decisions on it, beginning with Johnson v. M’Intosh in 1823. “The doctrine has been primarily used to support decisions invalidating or ignoring aboriginal possession of land in favor of colonial or post-colonial governments.”

Recently, however, participants in the Pan-Amazonian Synod recognized that Indigenous peoples “confront us with the memory of the past and with the wounds caused during long periods of colonization. … There were moments when the Church was complicit with the colonizers, and this stifled the prophetic voice of the Gospel. Many of the obstacles to a dialogical evangelization and to being open to cultural otherness are historical in character and hidden behind certain petrified doctrines.”  Pope Francis, too, asked Indigenous peoples for “forgiveness, not only for the offenses of the Church itself but also for the crimes against the original peoples during the so-called conquest of America.”

Acknowledging complicity is an important step toward addressing the harm done, but we also must work actively to facilitate right relationships with Indigenous peoples – by advocating for policies that protect their culture and independence and enable their flourishing, and by listening to their voices and learning from their wisdom. 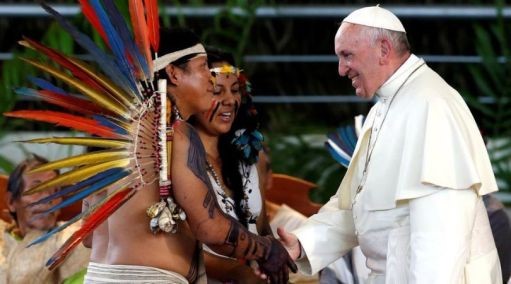 To people of non-native cultures caught up in the historical habits of domination and consumption, Pope Francis tells us,

Indigenous peoples are a living appeal for hope. They remind us that human beings have a shared responsibility in the care of the “common home”. And if certain decisions taken thus far have ruined it, it is never too late to learn the lesson and adopt a new lifestyle. It is about adopting a way to move forward which, leaving behind superficial approaches and harmful or exploitative habits, overcomes atrocious individualism, convulsive consumerism and cold selfishness. … And we must learn this.

Christ came “to proclaim liberty to captives and … to let the oppressed go free.”  As members of the Body of Christ – the physical manifestation of Christ in the world today – our actions should further this mission, affirming that “the parts of the body that seem to be weaker are all the more necessary.”  Because we share the bonds of common humanity, our own flourishing is tied to the flourishing of all our brothers and sisters, especially those who have been marginalized. In light of this, as Pope Francis says, “If we join forces [with Indigenous peoples] and, in a constructive spirit, engage in patient and generous dialogue, we will end up becoming more aware that we need each other.”  Let us take this advice to heart, and stand in solidarity with our Indigenous brothers and sisters.

Please join the School Sisters of Notre Dame by participating in some of the following actions, as we “educate, advocate, and act, in collaboration with others, for the dignity of life and the care of all creation.”

1.    Take time to celebrate and honor the heritage of Indigenous peoples. Here is a list of five suggested actions for those in the United States. For those in Canada, click here.

2.    Learn about some of the initiatives underway by Native American tribes and Aboriginal women to counter the scourge of human trafficking in their communities.

3.    Advocate for justice for Indigenous peoples.

4.    Reflect on the history of the Doctrine of Discovery and its current implications.

5.    Pray for justice for Indigenous communities – for the women and girls who are missing or at risk of being trafficked, and for restoration for their communities so that the risk is diminished.