Initial Call of School Sisters of Notre Dame to Sudan

On July 6, 1858, Mother Theresa wrote to the Royal Government of Upper Bavaria, “Approximately three years ago, some African children were brought to Bavaria in order to teach them Christianity, win them for the reign of God, and save their souls. The Poor School Sisters were also asked whether they, like other convents here and abroad, would accept some of these children for the love of God. We agreed to accept seven girls. A short time later, they arrived in the most pitiful condition. Oliviere brought approximately 40 African children in all. At first, they stayed at our convent in Munich-Au, but then many of them were sent in groups to other religious houses. The baptismal records in the church in Munich-Au gives the African names of the seven girls who stayed with our sisters, their age and place of birth, date of Baptism, baptismal names, and the names of their sponsors. The children came from various parts of Africa, including Darfur.

Mother Theresa mentions seven girls in her letter, but other sources indicate that our sisters cared for nine girls in all. Most of them died within a short time, but one supposedly ran away and was married in Constantinople. Elena Vanda, another of these children, survived and stayed with the sisters. She was very skilled in needlework, served as a portress, and thus became well-known in the city of Munich. Elena was in her mid-thirties when she died. In a letter written in early 1859, Mother Theresa wrote, “Our physician attributes their early deaths to tuberculosis, which developed during the journey out of the tropical climate and across the sea. In any case, there is no thought of sending any more children to us.” (2787)

Mother Theresa recognized very soon that it would be better for the children to stay in their own homeland and receive an education there. Toward the end of her first letter on this topic, she wrote, “From the beginning, the children’s support depended entirely upon the mercy of God. This will be the case even more in the future because of the recent death of the outstanding missionary to Africa, Fr. Knoblecher, who, when he accompanied these girls here, began negotiations with us about an African mission of Poor School Sisters.” This was in 1858!

Who was this “outstanding missionary?” Ignatius Knoblecher was born in Slovenia in 1819. He completed his studies in Rome where he became interested in missionary work through the Propaganda Fide (Propagation of the Faith). He was ordained in 1845.

On April 3, 1846, Pope Gregory XVI officially announced the establishment of the Apostolic Vicariate of Central Africa. It was larger than the whole of Europe. Soon after this, Fr. Knoblecher and three or four other priests were sent to open the first mission in the new vicariate. They first spent some time in Lebanon and Syria to become familiar with the rites and customs of Oriental Christians. A Polish Jesuit, Fr. Maximilian Ryllo, had been in Lebanon since 1836 and was appointed apostolic vicar of Central Africa. In this position, he was to lead the missionaries into Sudan. The missionaries left Lebanon in September 1847, reached Khartoum in February 1848, and began to establish a Catholic mission there.

Khartoum is located where the White Nile and the Blue Nile join to form the Nile River. It was founded in the early 1820s and was considered a very dangerous place, “the lion’s mouth” as it were. It was also the starting point for scientific and missionary expeditions into the continent of Africa.

Four months after the missionaries arrived in Khartoum, Fr. Ryllo died. About the same time, revolutions broke out in many parts of Europe (1848) and the missionaries were told to give up their work and come home. Fr. Knoblecher, who was now in charge of the mission, felt that too much had already been invested in the cause and he decided to stay. He had a school, a chapel, and living quarters built on property acquired in Khartoum.

European and African boys were taught together in the school. The African boys had been ransomed from the slave market and were being educated so that they could later return to their homeland as missionaries. By 1856, eight of these boys were sent to Europe to study theology. It can be surmised that Fr. Knoblecher also wanted to establish a similar school for girls in Khartoum under the direction of the Poor School Sisters.

After 1852, new missions were founded in Gondokoro and Heiligenkreuz, a place that is now known as Kanisia (Arabic for church). Nevertheless, the missionaries’ efforts were mostly in vain because of the loss of personnel. Of the 100 missionaries who went to this area between 1848 and 1863, ¾ of them died of malaria, tropical fever, or intestinal diseases. Explorers and merchants did not fare any better. It can also be surmised that the Poor School Sisters would not have fared any better either.

Islam, the slave trade, and European merchants were great obstacles to missionary work and few Africans from the area became Christians in the mid-nineteenth century. Before the missionaries came, the members of the tribes had never seen or known a white person and they “could not understand why these people came from such a distance to upset their whole life system.”

Fr. Knoblecher’s first priority was to explore the territory and to make himself accepted by the local people. He traveled much and wrote meticulous diaries and notes on what he found. These reports continue to be a valuable source of information about this part of Africa in the mid-nineteenth century.

Through his travels, as well as the students at the mission school, Fr. Knoblecher learned some of the languages spoken in the interior of Africa. A fine linguist, he compiled a dictionary of the Bari and Denka languages in particular.

In 1858, Fr. Knoblecher returned to Europe and, according to Mother Theresa’s letter, visited her in Munich. He died in Naples on April 13, 1858, at the age of 39. His death not only ended the negotiations about a mission of the Poor School Sisters but was also a blow to the mission stations in Sudan, which were closed a few years later. Nevertheless, the mission came to life again through the efforts of St. Daniel Comboni and the missionaries of the congregations that he founded, which were based on a new concept of missionary activity that continues to bear fruit today.

1858 also marked the 25th anniversary of the foundation of the congregation. A commemorative plaque was prepared for the occasion and can be found in the heritage room

in the Munich motherhouse. In the upper circle, we see Mary and the Child Jesus, St. Augustine, and St. Peter Fourier. Bishop Wittmann and Fr. Francis Sebastian Job are pictured to the left and the right. The two lists contain the names of each mission in the congregation in 1858.

In the center, we have a picture of a School Sister of Notre Dame with three girls, indicating the consciousness of the sisters at the time. Now, 150 years later, School Sisters of Notre Dame are responding to needs in the place where the first call to open a mission in Africa originated. 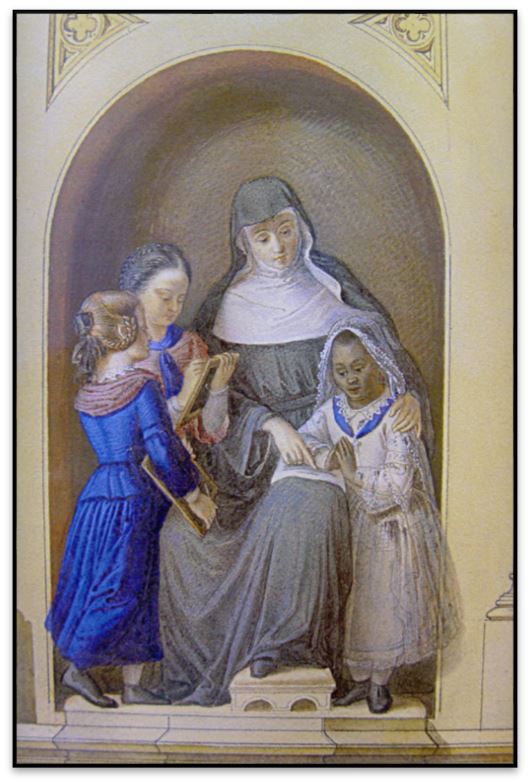