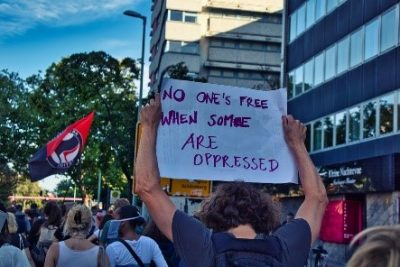 “Imagine a world where your nationality won’t matter as much as your humanity does.” (Daniel Refugee Jesuit Refugee Service UK.)

On Sunday September 27th, 2020 Pope Francis marked the 106th World Day of Migrants and Refugees. In his message titled “Forced like Jesus Christ to flee. Welcoming, protecting, promoting and integrating internally displaced persons” he addressed the needs of those who are discarded by society. (Pope Francis)

Compassionate, Life-Giving Creator, deepen within us the realization that Jesus himself faced the uncertainty and tragedy of being forced to flee so that we see the problems faced by so many in our world today. With Pope Francis, may we see “in the faces of the hungry, the thirsty, the naked, the sick, strangers and prisoners…the face of Christ who pleads with us to help.” (Pope Francis)  In the spirit of Mother Theresa may each of us do whatever God tells us as we respond to this dire situation in our world. (Cf. YAS, GD 30)

“When we talk about migrants and displaced persons, all too often we stop at statistics. But it is not about statistics; it is about real people!”. (Pope Francis) Never before in history, has common destiny beckoned us to seek a new beginning … a new reverence for life…for justice and peace.”(Earth Charter) By July 2020, nearly 80 million people worldwide were displaced from their homes. 26 million were forced to flee their own countries entirely… becoming refugees. Why? Because of war, violence, flooding, draught. (Norwegian Refugee Council for 2019) Facts and figures from around the world show that there are 26 million refugees globally, one half ie. 13 million are children!  85% of refugees are being hosted in developing countries which already struggle to provide for their own citizens.  1.4 million refugees need resettlement now! (World Vision; UN News)

“Many European countries are deporting people seeking asylum back to countries where they could face torture, rape – even death.” (Now is the time: Amnesty International) Some are deporting them to tiny off-shore detention camps on small islands, some smaller than many airports. The result – high rates of mental trauma, self-harm, and suicide attempts among adults and among children! ( Naura: Australia’s Shame and a warning for Europe: Amnesty International)

Every day, people all over the world, leave their homes in search of a safer, better life. Following the 2017 destruction of “the Jungle”, a refugee camp in France, conditions for vulnerable people hoping for safe living conditions worsened in northern part of that country. Local politicians made it illegal to provide food in certain areas. French riot police monitored, questioned, and disrupted volunteers during food distributions in the new permitted refugee locations. Laudato Si states that we cannot care for the rest of nature “if our hearts lack tenderness, compassion and concern for our fellow human beings.” (Laudato Si” # 91)

“We must regain the conviction that we need one another, that we have a shared responsibility for others and the world.” (General Council Circular 17/20 Sept.) Here are a few suggestions for how we and those among whom we minister may respond:

Ask where have people come from and why?
How many children, students, have refugees or migrants in their ancestry?
Trace the history of refugees in your country.
Learn to say a few things in a new language.
School choirs could create a song about welcoming refugees.
Learn 5 facts about refugees.
Alban is the patron of refugees. His feast is 22nd June. What can we learn from him?
What is the difference between migrants and refugees?
Add your voice to a petition, take action locally, and urge government to honor commitments to settle more migrants and refugees.
Daily pray earnestly for migrants, refugees and displaced persons mindful that: “Behind the statistics are people filled with unique life experiences and dreams for the future. They are mothers longing to return home, fathers yearning to work again, children searching for a childhood.” (Mercy Corps)

Saint Alban, you gave us an example of hospitality by opening your home to one in need, and as a result of this encounter, you were completely changed. We ask that through your intercession, and in the spirit of Blessed Theresa of Jesus, we may be courageous to help those who are forced to flee their homes in search of safety.  May “we call ourselves and others to embody gospel values and to live the social teachings of the church.” (YAS GD 33a) May our experience during the pandemic not only help us to empathize with the experiences of refugees and migrants, but fuel a persistent call for change. We ask this in Jesus’ name.  Amen