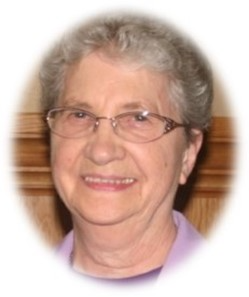 Sister Alfreda was the oldest of eight children – six girls and two boys. Shortly before marrying her father, Gordon, her mother became a Catholic amidst great opposition from her Mennonite family.

At St. Clements School, Preston, Ontario, she was taught by Sister Alfreda Arnold who inspired the young Helen to be a nun. It was difficult to leave her loving family, not only her siblings, but aunts, uncles and cousins. She wrote that LOVE was a very strong component on both sides of her family.

Helen entered the candidature in September 1946. In 1948 she was pleased to receive the name Novice Mary Alfreda, in memory of her beloved teacher.

From 1949 -1953, Sister Alfreda was in charge of young children at St. Agatha Orphanage, St. Agatha, Ontario. After helping with the boarding students at Notre Dame Academy, Waterdown for two years, she returned to St. Agatha Orphanage taking care of the boys until 1967.

Sister Alfreda moved to Notre Dame Convent School, Lingfield, England, where she was in charge of 40 senior boarders from 1969-1984. With her quick wit, sense of humour and caring nature, she endeared herself to the girls, who came from various countries.

A highlight of her life was participating in the renewal program in Chatawa in 1985. She wrote, “It was a flowering of grace…a touching of LIFE itself.”

Later in 1985, her desire to serve on the missions and join her sister, Sister Martin de Porres, in La Paz, Bolivia became a reality. She taught religion to children, visited the campos, and assisted in the parish. She wrote that she learned so much from the Bolivian people.

On her return to Ontario in 1999 she was a member of the leadership team at Notre Dame Convent, Waterdown.

One day when answering the phone while at the reception desk in the motherhouse, a caller identified himself as John and said he wanted information on St. Agatha Orphanage. Sister Alfreda asked what years he was there and who looked after him.  He replied, “Sister Frieda.” She asked, “Do you mean Alfreda?” “That ‘s it” he said. Alfreda replied,” Well, young man, you are talking to her.” As one can imagine, they had an animated conversation. Shortly after, the phone rang again. Still in shock, John said he had phoned his wife about the amazing news. He also shared that he was a chief of police in California. A month later, Sister Alfreda was present at a benefit performance for Notre Dame of St. Agatha. Boris, the youngest brother of John, attended this event hoping to contact Sister Alfreda. At the intermission, he found her. Another unexpected reunion!

Sister Alfreda radiated joy. Her conversations were always positive and witty. She was never idle – either she was writing letters or knitting teddy bears, which the Mennonite committee distributed to needy children. Another project involving her family and associates at Christmas was wrapping shoe boxes in Christmas paper and filling them with a variety of gifts. These were distributed to children of lower-income families.

Prayer was important to Sister Alfreda. A companion sister recalled, “rosary in hand saying the rosary, she had faithfulness to daily personal prayer, to saying the Office and attending Mass. She had a loving relationship with both Jesus and Mary, which sustained her in her mission of loving service wherever and however she was called to minister, whether in Canada, England or Bolivia.”

Mass of Christian Burial was celebrated on December 13 by Rev. Pablito Labado, Chaplain, followed by interment of her cremated remains at Gate of Heaven Cemetery, Burlington.

She is survived by her siblings, Sister Martin de Porres, SSND, Dorothy Ruller and Doug. She was predeceased by John, Sandra Wakeford, Patricia Witmer and Paula Skinner, who passed away on November 25, 2022.

As Christmas is approaching, may Sister Alfreda ask our God to send the gifts of healing and peace to our troubled world.