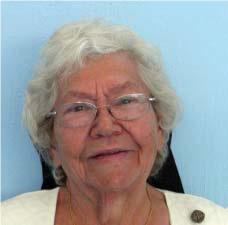 Mary Anne Cielocha, was born in Chicago on January 27, 1930, one of the youngest of the four daughters and seven sons born to John Cielocha (born in Poland) and Martha Glowinski (born in Chicago).  Along with her older brothers and sisters, she attended St. John Cantius School. Her mother’s prolonged illness put Mary Anne into the position of having to care for their home and also cook for the entire family. In addition, she tutored an older brother who had suffered from rheumatic fever.

After completing eighth grade, Mary Anne “felt a strong desire” to enter religious life, but because of the family situation, she decided to wait until after secondary school, which she attended at St. Stanislaus Kostka High School, also in Chicago.

During her high school years, Mary Anne gave serious thought to becoming a doctor.  But “regardless of how much the medical field attracted me, the call to answer His invitation was constantly increasing.”  She entered the School Sisters of Notre Dame motherhouse in Milwaukee in 1948; was received into the novitiate there in 1950, receiving the name Sister Cor Marie; and was professed in 1951.  She took her final vows in 1957.

As a novice, Cor Marie taught grades 2 and 3 at Holy Ghost School in Chippewa Falls, Wisconsin.  After profession, she taught primary grades at St. John Kanty and St. Mary Czestochowa in Milwaukee, and then at St. Helena, St. Margaret and St. Michael in Chicago.

In 1967, she was assigned to St. Patrick, Peoria, Illinois, and spent the rest of her life working in the Peoria area in the capacities of teacher and principal.

During her teaching years, Cor Marie studied for and received a BA in History and Sociology at Mount Mary College in Milwaukee in 1960, and an MA in Education and Psychology from Cardinal Stritch College in Illinois and Illinois State University, in 1967.  With this preparation, she founded a Developmental Center for academically handicapped children, especially those with autism.

In 1968, Sister Cor Marie was recalled to the DeKalb motherhouse due to poor health.  She was eager to return to Peoria, and was soon able to do so. Cor Marie worked diligently for the poor and underprivileged in many settings, but was particularly well known for her work in the Peoria area.  Her commitments included daycare and Head Start for children and programs for adults in job training.  In 1974, she was named “Citizen of the Year” for her work in the East Peoria Family Center, attended by forty children ages one to five, and which also included older children in a reading clinic.

From 1985 on, she was the administrator of the Children’s Center for students with special needs.  She adopted three of the children. She also taught and supervised the Child Development Program for fourteen years at Illinois Central College and was elected President of the Illinois Reading Council.

In an article about the elder members of their area in 2011, a local newspaper said: “Her heart has belonged to the youngsters at the Children’s Center of Tazewell County (in Creve Coeur, near Peoria) for 36 years.  Not only does she oversee the developmental process she designed for the students, but she cooks breakfast and lunch, washes up and offers tough love along with the smiles and hugs they need.  As she said, “I’ll retire when they put the lid on the coffin.  When my back was so bad I couldn’t stand up, I taught lying on the floor.”

Her faith community and friends celebrated her 70th Jubilee as a School Sister of Notre Dame on April 25, 2021 at St. Anthony Church in Peoria.  In a moving moment during the liturgy, Cor Marie renewed her vows and expressed her gratitude to God and to the School Sisters of Notre Dame for the many blessings of her life.

Sister Cor Marie died on June 1, 2021, after several weeks in hospice.  She had also been cared for by one of her adopted sons.

Visitation was at St. Anthony Church in Peoria, on Monday, June 7, followed by liturgy.  Burial was at St. Patrick Cemetery in Kickapoo, Illinois.  Sister Miriam Patrick Cummings spoke at the ceremonies, on behalf of the School Sisters of Notre Dame.