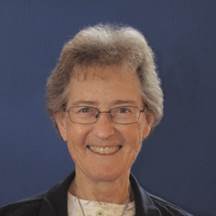 Corinne Alice Gmuer was born in Pittsburgh to Matthew A. and Loretta Marie Scheetz Gmuer on March 8, 1930; her birth increased her family to three girls and one boy. Eventually it would number four boys and four girls. At her baptism on the 23rd at Holy Name Church, her parents honored the Sacred Heart of Jesus in her first name; this remained a strong devotion all Corinne’s life.

A memory of her childhood was “family walks down to the river on Sundays, each one clutching that nickel for ice cream.” She joined her brothers and sisters in their “daily parade” to Holy Name of Jesus School in 1936 to be taught by the School Sisters of Notre Dame. First Holy Communion followed in 1938; Confirmation by Bishop Hugh J. Boyle in 1943 fostered an intense growing desire to become a Sister. When she asked her parents in 8th grade if she could go to the Juniorate, they felt she was too young to leave home and wanted her to go to high school in Pittsburgh.

Placing her trust in the Sacred Heart, her namesake, Corinne wrote to Mother Philemon anyway and was accepted; a few days before graduation she asked her parents again. They consented now, “seeing that I desired it above every other desire,” Sister Corrine noted in her autobiography upon entering the congregation. The summer of graduation, 1944, was happy and exciting for Corrine as she prepared to go to Fort Lee, New Jersey. “With the thought of giving all to God,” she entered the Juniorate, and found the days “happy and memorable. Sister Dosithea, with her kind way, helped me in many ways” that strengthened Corinne’s desire to serve God and teach little ones.

Corinne received the bonnet on August 26, 1948, and Mother Myles had arranged for her to stay with her family until August 28, when she left for Baltimore. It was the last time “my father would see me,” the last full family reunion, she wrote in her autobiography.

On September 8, after very few days in the Candidature, Corinne found herself standing in front of 36 second-graders at Blessed Sacrament School in Baltimore. She was happy to prepare them for First Communion and always considered their special day, May 19, 1949, an important event in her own life. Her second mission the following September was Our Lady of Mount Carmel in Camden, New Jersey.  Here 45 children received not only First Communion but also Confirmation.

Corinne’s father became ill and died when she had only been a few days in Camden. When she set out for home, she believed he was very sick but still alive, and learned of his death only when she arrived. “It was hard to take..." she admitted.

About her first two years teaching, Corinne wrote, “They did much in the strengthening of my vocation and my desire to give my all to the Sacred Heart through Mary and His little ones.” At Reception on July 17, 1950, she received the religious name, Mary Borgia, and was professed a year later on August 4, 1951.

Corinne’s mother died in 1952, and she remained very devoted to her large family, especially her sister Carol, who had become Benedictine Sister Mary Agnes and continued to live in Pittsburgh.

In 1951 Corinne began 52 unbroken years of service in schools as teacher, principal, coordinator of pre-K/primary grades, and Assistant Superintendent of Schools in five states - Maryland, Connecticut, New Jersey, Pennsylvania, and Florida. The last two roles listed were in the Archdiocese of Miami from 1994 to 2001. Her longest times at missions were 12 years at St. Philomena, Squirrel Hill, Pittsburgh, as Elementary Teacher, and 12 years in Cumberland, Maryland, as Administrator at Neumann Early Childhood Center. In all these roles she used her three degrees: a B.S. in Education from the College of Notre Dame of Maryland (now University); a M.E. in Library Science from Duquesne University; and a M.A. in Administation/Youth Ministry from Nova Southeastern University in Fort Lauderdale, Florida.

The last years of Corinne’s remarkable but very typical ministerial life in SSND were spent volunteering in the Diocese of Palm Beach, Florida. Here she served as Coordinator of Volunteers at St. Ann Place, a very comprehensive ministry to the homeless founded in St. Ann Parish and greatly served by Sisters Carleen Cekal and Mary Oliver Hudon. Then schools entered her life again; Corinne was an educational consultant at St. Ann School and served for a time as Principal. This describes her last six years on mission before she came to Villa Notre Dame in 2010.

Petite in stature, gentle and self-effacing, Corinne was loved and appreciated wherever she was. She made new friends at VND; her quiet and deep prayer life was sensed and appreciated. A Sister who knew her in Miami remembered that she always made sure that the children she served were impressed with the truth of how much God loved them.

Corinne’s last illness was long and trying; it became a tribute to her faith and patience and to the devotion of her many faithful Sisters and the VND staff. A second-grade student of hers, Franciscan Father Dan Grigassy, a Pastor in Paterson, New Jersey, had visited from time to time, and, consolingly, was with her just a day or two before her death. He also kept in touch with other Squirrel Hill students of hers.

Devoted caregivers Sisters Kathy Fullerton and Theresa Torsone were with her early on the morning of Saturday, August 29, when Corinne breathed her final yes to God. On September 8 (Father Dan: “She would have liked that day!), in the presence of her cremains, the VND community will celebrate a private Liturgy of Christian Burial. A few sisters will be able to be present at the interment in the community section of St. Mary Cemetery, Bethel, Connecticut.