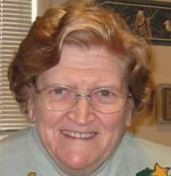 “On a Wednesday evening, Aug. 28, 1940, a bouncing baby girl was born to John W. and Elizabeth O’Toole Kelly” in Pittsburgh, Pa.  Now a family of seven, the Kellys welcomed their youngest child, Jacqueline, and took her to be baptized at St. Philomena’s Church.

At the age of 7, Jackie’s education began in the first grade at St. Philomena’s School, where she later prepared to receive her first Holy Communion and Confirmation.  Jackie’s early days were filled with family change as her brother John and sisters Kathleen and Ursula responded to their calls to religious life.  John was ordained a Redemptorist priest, and Kathleen and Ursula became School Sisters of Notre Dame.

Jackie’s own thoughts of becoming a religious Sister began when she was a first grader in the class of Sister Brittia.  When Sister asked the child, “What do you want to be?”  Jackie responded, “I want to be just like you.”  Upon graduation from St. Philomena’s School, Jackie entered the SSND Aspiranture at Fort Lee, N.J. as the first step in fulfilling her dream.

Four years at the Aspiranture “flew by” as Jackie prepared for the religious life.  Her beloved mother died during this time.  After graduation, Jackie, accompanied by her sister Regina, traveled to the Dominican Republic where their brother, Fr. John Kelly CSsR, was stationed.  This trip was an unforgettable experience for Jackie.

On Sept. 7, 1958, Jackie received the candidate’s veil at St. Philomena’s and was driven to the motherhouse in Baltimore by her family. Received into the novitiate on July 11, 1959, she was given the name, Sister Elizabeth Marie. Sister professed her first vows on July 30, 1960.

Sister Elizabeth Marie taught elementary classes at schools in Camden, N.J., Annapolis, Md. and Pittsburgh, Pa.  In 1981 she started as a student in the hospital chaplaincy program at Mercy Hospital, Pittsburgh.  Elizabeth spent the next 25 years as a hospital chaplain and director of spiritual services at hospitals in the Midwest. She was also the Director of Associates for the AM Province in her later years.

After a sabbatical at the Catholic Theological Union in Chicago, Elizabeth Marie returned to her family home in Pittsburgh to care for family members. She retired to prayer and presence at Maria Health Care Center in 2018.

Elizabeth Marie was characterized by her deep love of family and the SSND community.  Though a very private person, she was friendly, was a good listener and had a dry sense of humor. Gracious and hospitable, she was always welcoming to visitors or assisting those in need.

Sister Elizabeth Marie’s generosity in helping others made her praised and well respected in her hospital ministry.  She was appreciated and effective in her later ministry with the SSND Associates, too.  On the occasion of her 60th year of profession, Sister gave special thanks to her family and those who supported her by their love and encouragement.