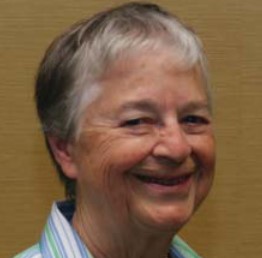 “The last member of the Nadeau family arrived on February 23, 1934. My father, Cleophas Joseph Nadeau, and my mother, Marie Sara LeBlanc, both Catholics, christened their third daughter Janice Marie.”  This is the first sentence of the autobiography Sister Janice wrote on entering the novitiate in 1954. Her father was a native of Island Pond, Vermont, and her mother, of New Brunswick, Canada. They later settled in St. Peter and Paul Parish, Rochester, New York.

Janice graduated from the parish grammar school in 1948, and having been taught by SSNDs felt her first desire to become one of them.  Her high school years were spent at the Notre Dame Aspiranture at Holy Angels Academy in Fort Lee, NJ, from which she graduated in June 1952.  Summers at home were spent as a cashier at Wegman’s Food Market, and delivering the evening paper. She was following her older sister, Yvonne, when she entered the Candidature. During her first year in Baltimore, Janice concentrated in music at the College of Notre Dame of Maryland.  In the second year she taught piano and continued college classes.

At Reception into the Novitiate in 1954, Janice received the religious name Mary Jovita; she made her first profession on the 1st of August in 1955.  Then began her ministry of almost 30 years of teaching at schools in New Jersey and New York. Later Janice branched out into pastoral associate work and spiritual direction, for which she was trained at Regis College in Toronto, Canada.

After receiving her B.S. in Mathematics in 1957 from Seton Hall University, Sister Janice earned an M.S. in Science from Syracuse University in 1971, and a Certificate in Spirituality from Regis College in 1987. She retired in 2009 to Villa Notre Dame in Wilton, Connecticut, where she offered Prayer and Presence. Sister Janice was cared for, from 2017, at Northbridge Health Care Center in Bridgeport, Connecticut, where she died after a fall on May 6, 2022. The Northbridge staff sent a condolence card to The Watermark community, and remembered Janice fondly.

A Viewing, Wake Service, and Liturgy of Christian Burial were celebrated at St. Andrew Church in Bridgeport. Sister Eileen Shea gave a brief resume of Sister Janice’s life, and introduced her niece Donna W. Fish, and nephew David Walkup, children of her sister Theresa. David spoke of his aunt’s sense of humor, her fondness for travel and the beach, and especially how they all loved being around her. Eileen mentioned that the liturgy’s readings and prayers had been chosen by Janice for and with her Sister Yvonne, SSND, but never used because of Covid restrictions at the time of Sister Yvonne’s death.

Provincial Councilor Mary Roy Weiss spoke so gratefully of the date, December 10, 1961, when she, as an 8th grade student at Immaculate Conception School in Secaucus, New Jersey, had the first organ lesson she had requested of Sister Janice.

“Little did I know then how many blessings would result from that first lesson, and additional organ lessons, that helped me in my growing up, my religious life, my teaching career, and my liturgical work. It was not just a musical skill that she caught, she taught me how to worship God through music, to worship prayerfully, and to give generously to others what we have received.”

Father Robert Crofut, a good friend of the Watermark community, presided at the Funeral Mass. Although he did not know Sister Janice personally, his homily was deeply appreciative of her dedicated life. With Sister Pat Hammond, several Sisters viewed the liturgy via live streaming at The Watermark, as had been arranged by Sister Sue Czaplicki.