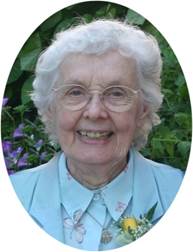 Sister Jean passed away in Waterdown, Ontario on November 11, 2022. She was 96 and in her 76th year as a School Sister of Notre Dame.

Sister Jean was born in Stratford, Ontario, the third in a family of five. When she was four years old the family moved to Kitchener, where she received her elementary and secondary education in schools taught by SSNDs. Her parents, Carl and Loretto

(Durand) Schnarr, were always solicitous for the Catholic education of their children.

Sister Jean states that the close contact with the Sisters awakened an admiration and respect for this vocation, but the thought of imitation never crossed her mind until she was in Grade 11. She crushed this thought immediately. After graduating from St. Mary’s High School, Kitchener, she planned on attending university, yet she knew she had a vocation to religious life.

While chatting with Sister Clarice Missere, Sister Jean disclosed her secret. Sister advised her to tell her parents. Her response was “I am not going to the convent, although I know I have a vocation.” However, Sister Jean’s disturbed state of mind about not following her vocation and the encouragement of Sister Clarice, finally led her to ask her parents to enter Notre Dame. Her parents greeted this request with joy and relief.

She entered the candidature in Waterdown in1944. During that year she attended Hamilton Teachers’ College. In July 1945, she was received as Novice Charles Marie.

Sister Jean began her teaching career in 1946 at St. Mary School, Cambridge, and taught later at Mary Immaculate School, Chepstow. At St. Anne School, Port Dalhousie and St. John School, Newmarket, she was both teacher and principal. She attained her B.A. degree from the University of Toronto in 1956.

From 1959-1966 Sister Jean was appointed as directress of postulants and taught at Notre Dame Academy, Waterdown. Her next move in 1966 was to South America, at language school in Comas, Peru, and then teaching at St. Andrew School, La Paz, Bolivia. When elected as provincial councillor for the Canadian Province in 1968, she returned to Waterdown. Following her leadership term of four years, she was principal at St. Stephen School, Cayuga. Again, Sister Jean was elected to community leadership, as provincial leader for the Canadian Province from 1980 to1984. This was followed by ministry to indigenous people in Beardmore, Aroland and Grassy Narrows.

In an article published in Soundings, October, 1989, Sister Jean related her results of seven weeks of interviewing “elders of native communities, native people in leadership positions, especially those in social service and education, native people in church ministry and religious who had a long history of ministry to native people.” Sister Jean wanted SSNDs to have a greater understanding of the concerns of the indigenous peoples. To quote the elders: “so that each of us can find that inner power within us, so that we can become whole again as persons and as a people.”

From 1993-2000 Sister Jean lived in Toronto, where the community assisted at a soup kitchen and taught English as a Second Language to Hispanic women. Until 2009, Sister Jean was engaged in catechetical correspondence for the Hamilton Diocese.

Sister Jean was a true educator in her ministries, whether in administration, SSND formation of postulants, parish ministry or in the classroom. Sister Jean was noted for her integrity, fairness and compassion. She was particularly concerned about the less fortunate.

Sister Jean focused on mission. She had a world vision, serving in ministry on two continents. She enabled persons to reach their full potential, calling forth leadership in women and being called forth to leadership herself. The quote from You Are Sent Constitution #22, exemplified  Sister Jean’s  ministry, “Like Mother Theresa we educate with the conviction that the world can be changed through the transformation of persons”.