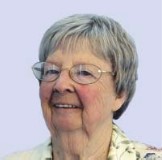 Sister Joellyn Grandchamp was born in Blue Island, IL, to Fred Grandchamp and Katherine Fritz, the third of twelve children (nine boys and three girls).  She was baptized LaVerne Frances at St. Benedict’s in Blue Island on October 31, 1926.  In her autobiography, Joellyn wrote: “My childhood was a very happy and interesting one, but how could it be otherwise with eight brothers? My two sisters were seven and eight years younger than I, so naturally I was mostly with my brothers.”

She was taught by SSNDs at St. Benedict School, Blue Island, and after graduation entered the Juniorate at Longwood.  Three years later, she entered the Candidature in the Milwaukee Motherhouse.

She wrote: “August 10, 1945, I received the name of Sister Mary Joellyn. My happiness knew no bounds when I found out I had Saint Joseph, my favorite saint, for my patron.”  Her dedication to, and trust in, her patron continued even in her final days journeying home to her God.

Her first obedience was to St. Elizabeth in Milwaukee to teach Grade One.  She continued teaching Grade One, and sometimes, Grade Two, at Sacred Heart, Laurium, Michigan; Saint Mary’s, De Pere, Wisconsin; St. Luke’s, Gary, Indiana; St. Ambrose, Chicago; and St. Margaret of Scotland, Chicago.  About teaching the primary grades, she wrote: “I have always loved dealing with little children, especially because of their unexpected reactions and their simplicity.”

During her years of teaching, she earned a B.A. in Education from Mount Mary University (formerly College).

Her ministry to her students and their families expanded while she was at St. Ambrose.  She joined with Hatti Williams, a social worker, and the Sisters in community with her to gather needed items of all kinds and deliver them to the families in public housing.  Of this service, she wrote: “The people we ministered to were truly the saints of today.”

After 57 years of teaching, Joellyn retired but continued to tutor first graders and work in a food pantry. In 2019, she moved to Marian Village to become a person of prayer and presence to the Sisters and residents there.

The Mass of Christian Burial was celebrated on November 15, 2022, in Our Lady of the Angels Chapel at Marian Village.  The celebrant was Father David Medow from Pastoral Care at Marian Village.  Joellyn’s brother, Richard, and younger family members of various generations were present, as well as Sisters and friends from Marian Village.

Burial followed at Holy Sepulchre Cemetery.  The burial service was quietly prayerful until those present were asked if they had ever received Sister Joellyn’s homemade cookies and fudge—joyful stories were then eagerly shared!