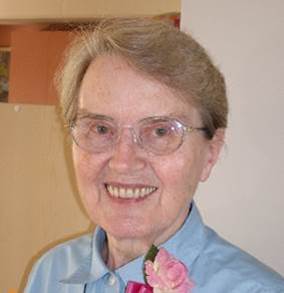 Sister Joseph Marie died on May 20, 2020 at the age of 90 and in her 69th year as a School Sister of Notre Dame. She died of natural causes.

Elizabeth and her twin sister, Veronica, were the youngest of a family of 11 children born to Joseph and Katherine (Kreiger) Gartner in Macklin, Saskatchewan. Her mother died when she was six years old. Elizabeth attended a rural school for Grades 1-8.

In 1948 their father was making plans to send them to Notre Dame Convent boarding school in Leipzig. At this time both twins were feeling a greater desire to enter religious life. They did not want to enter the Elizabethan Order, as their sister did, nor the Ursulines. Their pastor suggested they write for information about the Notre Dames. A reply invited them to spend a week at the boarding school. This confirmed their desire to enter SSND.

They received their candidate’s bonnet on August 9, 1948 at Leipzig, and the next day they travelled by train to Waterdown. The trip seemed very long, for they had never been that far away from home. As a candidate, Elizabeth continued her high school education at Notre Dame Academy and in 1950 became Novice Joseph Marie. Her twin became Novice Maria Goretti. In 1957, Sister Joseph Marie took final vows, but her sister decided to leave the convent.

Sister Joseph Marie began her teaching career at St. Mary’s School, Owen Sound. Here, she also directed the children’s choir. This choir won awards in the local music festival. The newly ordained priest asked the choir to sing for his First Mass. Her next assignments were at Holy Family School, Hamilton and St. Joseph School, Kitchener.

From 1962 – 1969 she taught at Sacred Heart School, Ladner, British Columbia. At this time the Latin Mass was changed to English. Again, with her gift of music and singing, Sister Joseph Marie taught parts of the Mass in English to all the students.

A new religion program with the theme of the Trinity was introduced. She relates that teaching that program to six-year-olds touched her personally. The children were so open and grateful as they became aware of God’s love for them.

On her return to Ontario she taught at St. Kevin School, Welland, St. James School, Toronto, and St. Joseph School, Aurora. From 1979 to 1983, Sister Joseph Marie assisted with various tasks in the motherhouse at Waterdown. The following year she studied at Newman Theological College, Edmonton, Alberta.

Pine Point, Northwest Territories was her next mission, where she taught religious education in the public school. From 1985-1991, while living in Cambridge, she assisted with the Diocesan Catechetical Correspondence Program.

Later, Sister Joseph Marie moved to Saskatchewan, her home province. For 14 years she engaged in pastoral ministry in Regina, Saskatoon, Wilkie, and Unity until 2007, when she moved to Notre Dame Convent, Waterdown.

Sister Joseph Marie had a compassionate heart and readily attended to the needs of others. Community prayers were important to her. She was an advocate of faith sharing.  During her last years she had extraordinary pain and suffering, which she accepted bravely. Coincidentally, when she died in the early morning of May 20, the fire alarm sounded at Notre Dame Convent. Was Sister Joseph Marie announcing to the community that she had entered into eternity?!

Due to the coronavirus pandemic, a memorial liturgy will be held at a later date. Burial has taken place at Gate of Heaven Cemetery, Burlington