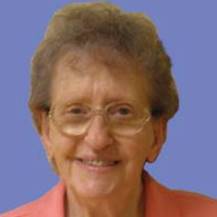 Dolores Keen was born at home in Chicago, IL, on July 23, 1930. She was the sixth child of Catherine (nee Jacob) and Jacob Keen, faith-filled Catholics.  A seventh child, Jacob, eventually completed a family of five girls and two boys.  Dolores admits to being a “spoiled baby sister” and her father’s “baby.” She wrote that her parents modeled being “loving, sharing, hard-working Christian people. How proud I am to be the last to carry on the Keen name, but I share in carrying out the Keen tradition.”

Dolores was baptized at St. Alphonsus Church on July 27. She received her First Holy Communion in spring of second grade and was confirmed the following fall. She attended St. Alphonsus Grade School, graduating in 1944, and St. Michael’s High School (for Girls), graduating in 1948. At her mother’s bidding, Dolores worked for a year before entering the convent.

She received a Bachelor of Science in Social Studies from Mount Mary College in 1964 and a Master of Arts in Administration in 1973 from Clarke College.

While in Peoria, in a mixed-culture school with children who were from families that were poor, Lori learned that those who are poor “are the rich ones, for they have hearts of gold and showed me how to love, to share, and to serve.”

Eventually, Lori changed to pastoral ministry at St. Odilo and Presentation Parishes in Chicago. She became personal advocate for our Sisters at Resurrection Life Center. In these roles, Lori opened her heart to the sick, the dying, the elderly and the bereaved.

Lori had a phenomenal memory from which she could readily share stories, poems, songs, anecdotes and memories. “The BEST times of my life were the times I could make others happy or when others helped me to be happy…I always loved to sing and dance…I am asking that my funeral Mass and Burial be celebrated in the tone of JOY!”

The Mass of Christian Burial was celebrated by Father Charles Watkins in Our Lady of the Angels Chapel, Marian Village, on Saturday, December 4, 2021. Interment followed at St. Joseph Cemetery, River Grove, IL.  Sister was buried with her family, next to her sister Angeline. Sister Lori is fondly remembered by many nieces and nephews, great and grand nieces and nephews, as well as by former students and many friends made over the years.