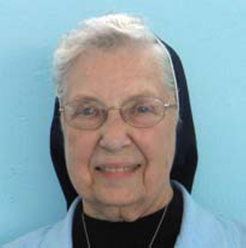 Janet Gensler was born on November 11, 1935 in Kickapoo, Illinois, the first of ten children of Martin Gensler and Josephine Gilles Gensler.  She grew up on a farm in Kickapoo, attending the SSND grade school in Kickapoo. In high school, she became an aspirant at the Academy of Our Lady in Chicago, and then at St. Mary’s Academy in Prairie du Chien, Wisconsin.

Janet entered the candidature at the Milwaukee motherhouse in 1953, and entered the novitiate there in 1954, receiving the name Mary Martin Therese.  She was professed at the Milwaukee motherhouse on July 11, 1955, and took her final vows at the Mequon motherhouse on July 11, 1961.  She received a bachelor of science degree at Mount Mary College in Milwaukee, in 1966, and a Master of Library Science at Rosary College in River Forest, Illinois,  in 1972.

Sister Martin Therese taught for over 44 years.  Her assignments included primary and intermediate grades at Ss. Peter and Paul in Gary, Indiana; St. Constance, in Chicago; St. James in Belvidere, Illinois; St. Alphonsus in Chicago; St. Mary in Mokena, Illinois; and Holy Family in Oglesby, Illinois.   Later, she cared for her parents from 2000 to 2004 in Peoria, Illinois, while volunteering at St. Mary in Kickapoo.

At St. Alphonsus, where she was missioned from 1971 to 1992, Martin taught grades 7 and 8 and served as a media specialist and assistant principal.  A letter from the school board president, Frank Jaramilla, noted:  “Attention is made to her on-going efforts to effectively organize, maintain, and expand on the Learning Center, the School’s curriculum resource program for both students and faculty. Her work with materials of varying format and complexity, parent volunteers, faculty, and students has been demonstrated in well-thought-out, creative, and professional ways. In recognition of her dedication and effective participation as a key faculty contributor to the school, her valuable contributions of time, effort, and energy; and her superior work, we have voted in executive session of the St. Alphonsus School Board to formally thank Sr. Martin Therese and express our sincerest gratitude.”

Martin moved to Marian Village in Homer Glen in September of 2019. Less than two months later, she was admitted to Silver Cross Hospital in New Lenox.  By November 18, she was moved to Mother Theresa Home in Lemont, Illinois, where she could receive the needed care. Sister Martin Therese died at Silver Cross Hospital on December 13, in the presence of three Sisters from Marian Village.

A wake service was held at Marian Village in Homer Glen, Illinois, on December 18, including a eulogy by Rev. Martin Hebda, and a reflection by Sister Emily Wollschlager. Visitation and the funeral Mass were held at St. Mary in Kickapoo, celebrated by Rev. Joseph Dondanville, on December 20.  Interment was in the family plot at St. Patrick Cemetery, Kickapoo.