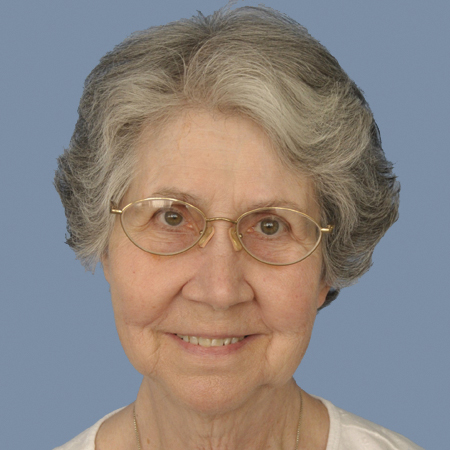 Florence Elizabeth, fourth of the seven children of George Frederick and Florence Hobbs Roeder, was born on March 1, 1937 in Baltimore, Md.  Florence was of the Catholic faith, and George converted to Catholicism shortly before their marriage. Their infant daughter, Florence Elizabeth, was baptized at St. Benedict Church, Baltimore.

Young Florence started school at St. Mark School, Catonsville, Md. in Sept., 1943, where she was taught by the School Sisters of Notre Dame.  As a first grader, she received her first Holy Communion at St. Mark Church and three years later was confirmed there by Bishop Lawrence Sheehan.  Upon graduation from the eighth grade, Florence “knew she had a vocation and wanted very much to be a School Sister of Notre Dame.”

Certain that “the School Sisters of Notre Dame stood for all that God wanted for her,” Florence was received as a candidate in the chapel of St. Mark Convent on Sept. 8, 1956.  She continued her studies as a sophomore at Notre Dame College. Florence entered the novitiate on July 13, 1957 and was given the name Sister Mary Gabriel. On July 26, 1958, Sister Gabriel professed her first vows.

Sister Gabriel completed her senior year in college as a newly professed Sister and graduated with a Bachelor of Arts degree in Mathematics and Chemistry from Notre Dame of Maryland in 1959.  She taught seventh grade at St. Joseph School, Verona, Pa. (1959-60) and math, science and religion classes at St. Maria Goretti High School, Hagerstown, Md. (1960-70).  Sister served in formation as Director of Vocations and Novices for the Baltimore Province and for the Interprovincial Novitiate (1970-76).  Sister Gabriel also obtained a Master of Arts in Theology from St. John’s University, Collegeville, Minn., in 1972 and did additional study at the Catholic Theological Union, Chicago Ill. (1976-77).

Sister Gabriel’s many years in Nigeria began in 1977 at the request of Bishop E.S. Obot of Ikot Ekpene Diocese to train minor seminarians and juniorate students at the Loreto Juniorate, Abak, Nigeria.  She returned to the U.S. periodically to care for her mother in her last illness, to study Hebrew in Baltimore, and to teach at Notre Dame Prep. Sister Gabriel devoted her remaining years of ministry to Nigeria, teaching scripture and theology at the Cross River State, University, Uyo (1981-88), the Juniorate of St. Joseph Minor Seminary, Zaria (1990-92) and St. Augustine Seminary in Jos (1992-94).

An achievement with a significant impact on the local community was the construction of the Notre Dame Secondary School for Girls in Mkar, Benue State, for which Sister Gabriel acted as supervisor. Concurrently, she served as area leader for the Sisters (1994-2002).  Finally, Gabriel taught the Postulants in Uyo, Akwa Ibom State (2002-07) until her retirement to Villa Assumpta.

Gabriel’s life was full and active. Always alert to the needs of others, she canvassed Nigerian villages for a study of tuberculosis prevention which resulted in a clinic and clean well water. Gabriel wrote grants for schools and for children with special needs. Her deep love of Scripture led her to form Bible study groups. She had a unique ability to bring the Scriptures to life, which touched and inspired her students and Sisters.

Sister Gabriel was a theologian, a teacher, a preacher and a mother.  She enriched many lives and was blessed with friends wherever she traveled.  Personal health issues did not stop her from reaching out and connecting to people in any way she could. She was welcoming, wanted to hear everyone’s thoughts and was a great believer in a person’s goodness.

Sister Gabriel lived an extraordinary life, a life of wisdom and great generosity of spirit. She accepted death with faith and equanimity. She was thoughtful, prayerful and wise to the end. It was said that whole villages in Africa will mourn her passing.

Sister Gabriel died at Greater Baltimore Medical Center on Aug., 8, 2019.  Rev. John McCloskey, OFM Cap. celebrated the Memorial Mass in the chapel at Villa Assumpta on Wed., Aug. 14. The liturgy was cantored by Sister Kathy Jager and Sister Comfort Anum of the province of Africa, whose vocation was inspired by Sister Gabriel.  Following the liturgy, a letter of condolence from Bishop William A. Avenya of the Diocese of Gboko, Nigeria was read by Sister Jeanne Barasha.

Sister Gabriel was a participant in the Rush Religious Study and donated her body to the Maryland State Anatomy Board. Her cremains will be interred at Villa Maria Cemetery, Glen Arm Rd., Glen Arm, Md. at a later date. Sister Gabriel is survived by her sister, Carolyn Roeder, sisters-in-law, Elizabeth and Patricia Roeder and brother-in-law, Bernard Semon. She is also survived by nine nieces and nephews.