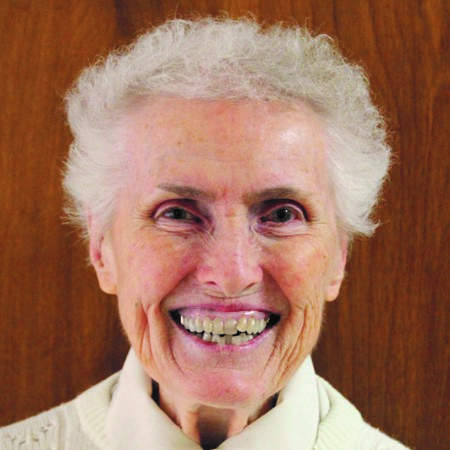 Ruth Eileen Smith was born in Somerville, Massachusetts, the first child of Raymond Vincent and Lydia Williams Smith, on Halloween, in 1925. She was baptized at Sacred Heart Church in Malden. Her father was a staunch Catholic from a Scotch Yankee family, and her mother a devout Methodist from an English family. Her only sister, Eleanor, was born in 1930.

After the family moved to Immaculate Conception Parish in Malden in 1931, Ruth began 12 years of schooling with SSNDs. When she received First Communion in 2nd grade, Ruth determined “to be especially good from then on.”  She learned the practice of saying short prayers until they became habitual to her. Later, when she was encouraged to hear daily Mass, a habit “her good mother helped her to keep,” she found it to be her greatest source of strength, lifelong.

Mrs. Smith always encouraged her children’s Catholicism in every way. Although her husband wanted her to become a Catholic, she said very strongly, “I could never leave the Methodists; the minister was so kind to my mother when she was widowed suddenly by the tragic death of my father. We never lacked for anything in those hard times.”

At the parish high school, Girls Catholic, starting in 1939, Ruth lost her shyness and, “It seemed as if everything my heart desired was had.  Leads in school plays, class leadership, scholastic and social and complete external success was mine.”  She realized as a junior, “The success that God allowed me to have made me a bit self-confident, self-complacent.”

Her Sisters in community always noticed, and usually enjoyed, Raymunda’s tendency toward the dramatic, realizing that it made her an excellent teacher and coach of drama and debate. She never lost her ability to tell a story as if it were a three-act play.

With this growing self-knowledge, Ruth’s attraction to religious life also grew. On December 8, 1942, as a junior, she wrote her first letter to Baltimore, with the Sisters her only confidantes. “Every fibre of my body bent toward this, and I was positive it was the right thing to do.”  A year later, after graduation in 1943, she received the Candidate’s bonnet from the Pastor, Father Fletcher, in the convent chapel on Fellsway East. Her parents had known all along of her desire; they offered no resistance.

During the two-year Candidature on Aisquith Street, “Blessed by good health and many happy companions,” Ruth wrote that “Most of our time was taken up with studies in the Teacher Training School.”  Still, she found time for “serious thinking, especially during meditation.”

“After battling for a year and a half, a wonderful new happiness descended upon me in the summer of 1944, when I promised never to go back to the world, never to leave Him if He will give me the grace.”  At Reception, she received the religious name, Mary Raymunda.

After First Profession in 1946 in Baltimore, Sister Raymunda was missioned to Caguas, Puerto Rico, until 1960. At Notre Dame High School, she taught English to all four classes. Students from those years were very loyal to her. In later years, they several times arranged trips to the Island for her and entertained her fondly when she came.

Raymunda next became one of seven SSNDs to open, in 1960, diocesan co-ed St. Thomas Aquinas High School in Dover, New Hampshire. The pioneers lived on the top floor of the school for the first 2 ½ years. Raymunda put the fledgling school “on the map” with her team of excellent debaters, as they traveled, first around New Hampshire and then New England, on the weekend debate circuit. In the classroom, her dramatic way of teaching had students jumping out of their seats to answer her questions. She was successful with kids of all abilities, loved and enjoyed by them.

After one year as principal of Girls Catholic in Malden, Raymunda returned to Dover as principal from 1969 to 1973. This was a difficult period with fewer Sisters on the faculty, and many everywhere grappling with changes in religious life. Students, in the spirit of the 60s, inclined toward rebellion, and the future of St. Thomas was very uncertain, mainly because of finances.

After a period of rest and studies at Fordham University, Raymunda received a second M.A. in Religious Education with a concentration in Adult Education. Her B.A. had been in English from the College of the Sacred Heart in Santurce, Puerto Rico, and her first M.A. from Boston College in English. Thus began another productive period in Raymunda’s life, as Director of Religious Education at three parishes in The Archdiocese of Boston—St. Adelaide in Peabody, St Mary of the Annunciation in Melrose, and St. Maria Goretti in Lynnfield. She took time out to enjoy our SSND sabbatical semester in Chatawa, Mississippi, midway through her ministry at St. Mary.

Father Richard Little, Pastor in Melrose, wrote this to the Diocesan Office of Religious Education when Raymunda was applying for the ministry of Regional Director there in 1990:

Sister is a consummate DRE, a superb administrator, a recruiter of teachers without equal, a superlative teacher, very financially responsible. She has turned a program that was at best lacking in many areas, into an excellent program. She is extremely cooperative and innovative and has integrated her program into the overall parish program in a way that I have never seen before. I sincerely regret losing her.

Before coming to Villa Notre Dame for retirement and community service in 2008, Raymunda worked part time with the Sisters of Notre Dame de Namur in Lawrence, Massachusetts, at their Education Center. As teacher of English as a Second Language for nine years, she commuted from North Reading, from a new SSND community of three, and later from the St. Mary Street Community in Malden. Later, she offered her ESL skills to the staff at Wilton; always busy, another task she had there was writing the house chronicles.

Raymunda’s main physical difficulty in her later years was hearing loss. She joined our Sisters at Ozanam Hall in Bayside, Queens, NY, on July 13, 2020, and died there late in the evening of April 14, 2021.  Sister Celeste Reinhart, announcing this to the community, wrote this fitting tribute to her. “Let us imagine her passionate entry into Heaven and ask her to give us a share of her energetic charisma.”

Raymunda’s sister, Eleanor, and brother-in-law, Bill Rockwood, survive her. On April 20, at the front door of VND, their children – her loving nephews, Stephen and Michael, and niece Karen Bishop – joined the community to pray and bless Raymunda’s coffin. They were also at her burial at St. Mary Cemetery in Bethel, Connecticut.