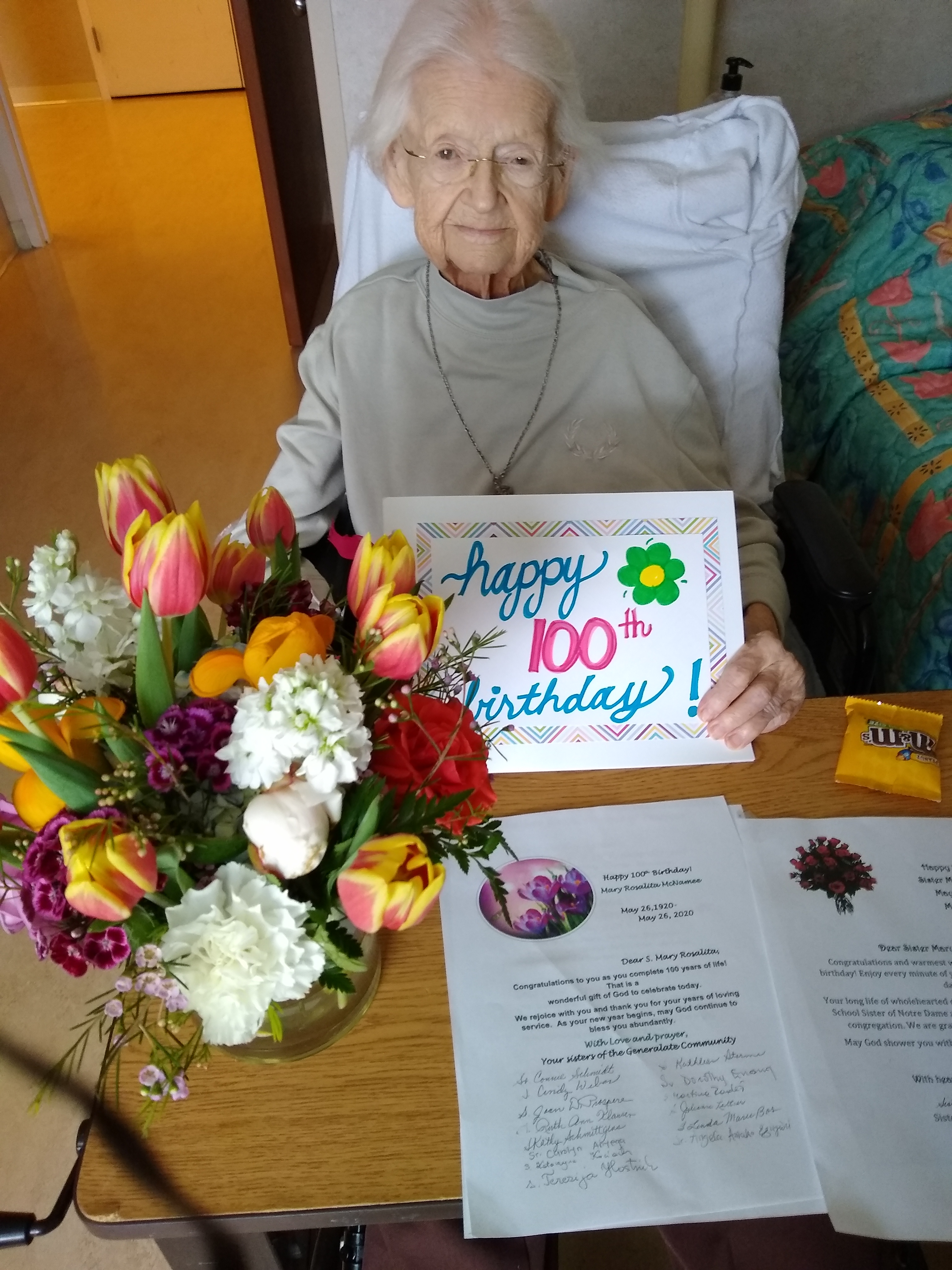 Two months after her 100th birthday, Sister Rosalita McNamee, our beloved “Rosie,” said her final yes to God at Ozanam Hall in Queens, New York, on the evening of July 24.

Rosalita was born in Brooklyn, on May 26, 1920.  Her parents, James B. and Mary Seery McNamee, both Brooklyn natives, baptized their second child and only daughter, Mildred, at St. Edward’s Church on June 13. One brother, James Edward, was seven years old at the time. Mildred’s First Communion in 1927 and Confirmation by Bishop Molloy in 1932 both took place at St. Saviour Parish, Brooklyn, where SSNDs staffed both a grade school and a high school for girls.

In a recent autobiography, Rosie remembered happy times with her family at Coney Island, a riding academy in Prospect Park, and summertime races in Saratoga. She mentioned especially still loving being a Girl Scout even after her friends dropped out.

Mildred’s elementary education was at public schools; she graduated from the 8th grade in June 1934, enrolled in St. Saviour High and loved the school. Years later she reminisced about going to Mary House on the lower East Side of Manhattan during these years, where she was inspired by meeting foundress Dorothy Day.

She told her parents of her desire to become a Sister during her junior year and they promised their consent after she completed high school. Two months after graduation in 1938, Mildred received the bonnet in the St. Saviour convent chapel and traveled to Aisquith Street in Baltimore to begin her candidature. She called the next two years “very happy” as she attended normal school. At Reception in July 1940, she received the name Mary Rosalita and was professed a year later.

A fascinating side note to Rosalita’s vocation to SSND is that two relatives of her paternal grandmother, an aunt and niece, had been in the community. Rosalita had obtained their obituaries from the archives in Milwaukee and put them in her file. Sister Sophia Mooney, born in Roscommon, Ireland, in 1833, had died in the Milwaukee Motherhouse in 1900. She had taught at several missions and also served as superior/principal. Sister Aloise (Mary) Ward, born in New York City in 1873, had been entrusted to her aunt Sister Sophia after the death of her father. Since her mother had to work, “Mamie” was brought up with the “minim boarders” at the Milwaukee Motherhouse, and later at the Prairie du Chien convent. She became an accomplished musician who taught music and was a church organist all her life.  She died at Holy Trinity, Milwaukee, and was buried at the Motherhouse, in 1930.

As a primary grade teacher, Rosalita spent five years at St. Peter School in Cambridge, Massachusetts; 12 at St. Joseph School in Washington, D.C.; and ten at St Joseph in Manhattan. In 1968, the Anchor Club of the Knights of Columbus in the Diocese of Bridgeport, Connecticut, offered a scholarship for a Sister to be prepared in special education. Mother Paschal asked Rosalita if she would be interested, and she spent the next year and a half as a full-time student at Teachers College of Columbia University.  Part of the program was the wonderful and very enriching opportunity to take courses in the Scandinavian countries. She received an M.A. in Special Education in 1970 and began, as agreed, five years of service to the Diocese.

And so began Rosalita’s long and much appreciated service to the Diocese of Bridgeport, beginning as Director of Special Education in the Diocesan Department of Religious Education. She arranged for the religious education of all those with special needs. A plaque given her in 1975 reads, “In appreciation of Sister Rosalita’s deep devotion in enriching the spiritual life of the retarded (sic) and their families.” Rosalita attributed her love for this ministry to having had an aunt with Down Syndrome who was never institutionalize by her family.

From 1977 to 1990, Rosalita served as Counselor/Evaluator of persons with special needs at the Kennedy Center in Bridgeport, a division of Parents and Friends of Retarded (sic) Citizens, Inc.  Using recently developed tools, she had “the arduous responsibility of psychological and diagnostic testing to determine the needs, qualifications, and abilities of each client in different areas of achievement. Training and guidance according to their different needs will ultimately bring every person to the desired goal of living independently in their communities.”

Numerous awards and letters of thanks and commendation in Rosalita’s file attest to her success in this ministry and the great appreciation she received.  She also organized Teen-Adult Clubs, Foster Grandparents, a Scouting group for special needs girls (passing on something she loved), trips to Disneland, and volunteered at the State Special Olympic meets. Over the years, Rosie became an admired “elder stateswoman” for the younger people working in the field of special education. Her whole life in ministry is summed up in this recent line sent to her by a student, “Of all my teachers, grammar school through college, you stand out in my memory as the kindest and most dedicated.”

Rosalita was active at the Wilton motherhouse, too, for many years as a driver and in her retirement as Coordinator of Hospitality. Until she went to Lourdes, she presided graciously over the card shop. Rosalita went to Ozanam Hall in September 2019 with the first group of Sisters.

A liturgy of Christian Burial will be celebrated at Villa Notre Dame when  appropriate. On Wednesday, July 29, Rosalita was buried in St. Mary Cemetery, Bethel, Connecticut. Sisters, joined by members of her family, gathered to sing their farewell blessing as the hearse from Ozanam paused at Villa Notre Dame. Family members and a few sisters accompanied it to Bethel. At the time of burial, the community prayed the prayers of commendation with Sister Theresa Lamy and Pat Hammond, community leaders, on the intercom.