Offering Solace in New York After 9/11

Many were called on September 11, 2001 – called home to their God, called to be heroes, called to help in any way they could, called to show kindness to strangers. Not long after the tragedy, Sister Laurentilla Back, SSND, was called to offer comfort as a member of the Red Cross’ Spiritual Care Air Incident Response team (known as SAIR). She shares here a reflection on that experience that she wrote on the first anniversary of the attacks in 2002.

Each time there is a remembrance service, a memorial, I look back to 9/11. I, like so many others, find myself transported to the time and place I was on that fateful day. I relive the pain and horror that I felt while watching four separate planes plow into four separate places…and I pause and I pray.

Geographically distanced from the events (I lived in Arkansas at the time), my experiences and feelings were certainly different from those in closer proximity. When I was asked to fly to New York as a member of the SAIR team on September 25, I was able to go without hesitancy, but not without fear and apprehension.

My first call was to the Motherhouse of my Baltimore SSND Province to ask for the prayers of our infirm and retired sisters. I knew I would need all the spiritual support I could rally. My neighbors and friends joined their prayers to mine, and I arrived in New York without incident. I was numb…unable to fathom the enormity of the disaster and certainly unable to comprehend the courage and dedication of those who lived, worked and moved in and out of the hallowed spaces.

The prayer of Father Mychal Judge was posted on the wall of the Chaplaincy area at the Brooklyn Red Cross Headquarters: 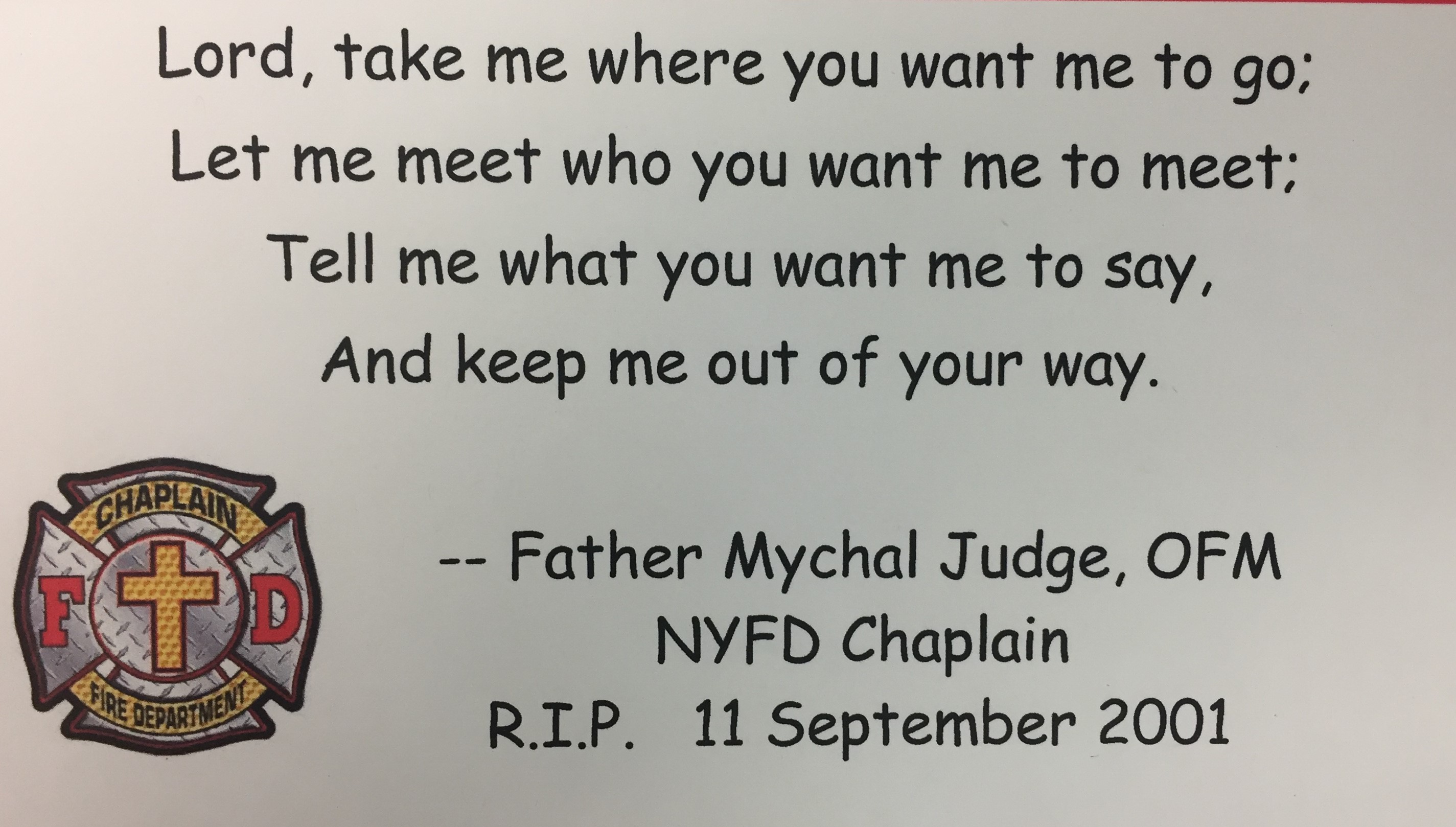 I can’t tell you how many times I said that prayer each day. I had my own prayer that I said as I began each day in my hotel room: Lord, let every beat of my heart be an act of adoration, every thought an act of praise, every word an act of thanksgiving. Let every movement of my hands be an act of supplication and every footstep an act of expiation, a prayer for forgiveness.

Since I walked many miles, breathing deeply of New York’s clouded air, I prayed more than I ever had. How fortunate I was to be a member of a team that knew prayer was needed as we performed tasks both mundane and profound. Our Jewish team member, Gila Katz, had requested that we pray at our morning staff meetings. It was a brief but needed moment or two to remind us why we were in New York, and that this was not our service but God’s compassion and love to share with others. How do I explain the courage and strength that came from that brief time together? All I know is that I always felt God’s peace and presence and knew God’s love as I began my day.

Our priest leader, Father Joe O’Donnell, shared Eucharist with workers whenever he was asked. He also shared Eucharist with me. So did all those team members who allowed me to see them united as one…broken, given, received…shared and poured out in their untiring efforts to heal and soothe.

Each evening, those of us who were at the Brooklyn Headquarters assembled once more to review the day, to leave behind the grit and darkness, the frustration of seeing so many needs and knowing how little we could do. Out final prayer was one for safety in traveling back and forth to our own rest. I can still hear the mournful tone of the subway whistle as a reverent conductor paid respects to those buried beneath the debris of the towers when we passed the area of the attack.

How many times I have reviewed those few short days I was able to be physically present in that sacred place. My security clearance allowed me complete access. My time there was a sacred time…reminiscent of those holy places trod by ancient prophets, priests and rulers; sanctified by martyrs and Jesus Himself. The reverence and respect exhibited by the firefighters, police officers, construction workers and others as they stepped aside for grieving families is a picture I carry with me. The anguish, tears and motivation that kept these workers responding beyond normal human endurance is indescribable.

I will cherish my memory of so many who labored so long under such difficult circumstances, and I will present them to our loving God again and again. I know that without the prayers of supportive people throughout the world, without the prayers of supportive team members who worked in close proximity, and without the arms of God personally upholding and supporting me during those very busy and very dark days, I should not have been able to be and do for those I met.

In retrospect, I praise our Father/Mother Creator God, who brought some semblance of order out of chaos, light out of darkness, and new life out of death (again). I thank our Redemptive God, who accepted the lives of those who died for others, and I celebrate the Spirit God who continues to enable and encourage each community of persons who strives to rebuild a non-violent world of freedom and peace.