A group of students from the Academy of the Holy Angels is broadening their horizons and learning about one of the province’s four commitments: immigration reform. Five students travelled to Arizona and Mexico for SSND’s Mission Awareness Process (MAP) experience.

On the first full day of their journey the young women began the day crossing the border from Arizona into Nogales, Mexico to serve breakfast at “The Comedor.” “The Comedor” is an aid station for traveling pilgrims. The facility assists people who are either preparing to cross the border into the U.S. or are recovering from being deported into Mexico.

The morning program began with an uplifting prayer and then volunteers discussed the services that are offered at “The Comedor.” In addition to the warm, hot meal served by the Holy Angels Academy (AHA) students, light medical care and clothes were also available.

Later, after helping the volunteers distribute food, the students met others who were volunteering that day. Within a few moments of talking to people, Mattias, a man unknown to the group, approached to say how thankful and appreciative he was to see young Americans who were engaged and wanted to help. Up until recently many would consider him a young American too.

“I’ve been in the states 28 years,” said Mattias, who goes by Matt at his home in Lake Havasu, Arizona. “My parents brought me to the U.S. when I was six years old.” 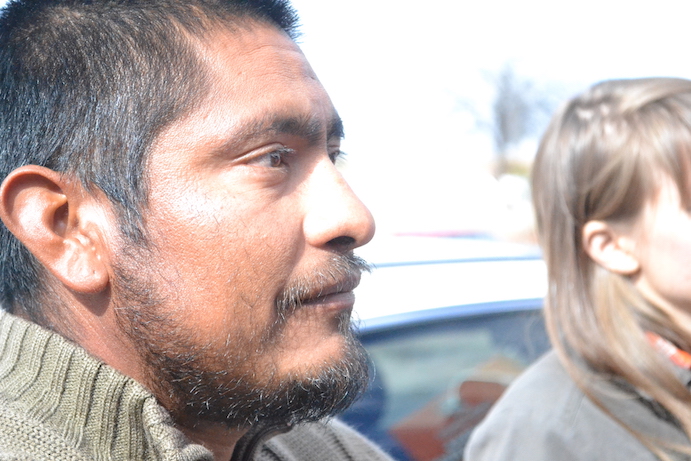 Matt is married to a U.S. citizen and both of his children are citizens. Until his deportation he was the foreman of a roofing company, held a work permit, and was in the process of getting a green card.

“I had a warrant from Immigration and Customs Enforcement (ICE) because I missed one of my court dates for my green card,” he said. “I walked outside my home to warm up my truck and the agents were waiting for me. I was in my pajamas.”

He told the group that after breakfast at The Comedor he was waiting for his younger brother, who is a U.S. citizen and Marine, to come pick him up. His next step is figuring out how to get home; for him, home is Arizona.

“I know I will get home to my family,” he said. “My kids don’t even know I’m here; my wife told them I am working.

He hopes to cross the border soon and return to his family and home country of nearly 30 years.

For more photos of the Holy Angels MAP experience, check out our Facebook page.