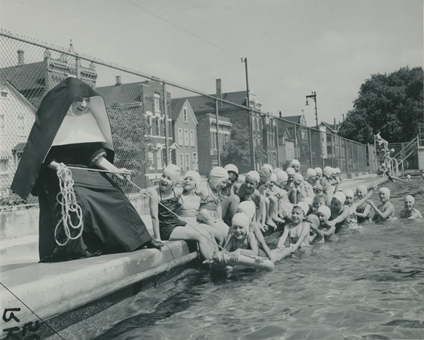 This summer, following the publication of Blessings magazine, Sister Marie Dolores Schneggenburger’s niece, Alma, contacted the province communications office. She was inquiring about the photo on the inside cover of the spring/summer edition and wondered if it could be her aunt. “She is having fun pulling several young girls in bathing suits along the side of a pool. She resembles one of my aunts in appearance and joy of living.”

Although the sister in the photo did not turn out to be her aunt, Alma shared some of her family history. “I was blessed to have five aunts who became School Sisters of Notre Dame. I was nine years old the last time I saw any of them, in the early 1950s. I believe Sister Marie Dolores is the only one still living. My five aunts were the daughters of Leo Schneggenburger. I believe you have several of his wood carvings.” 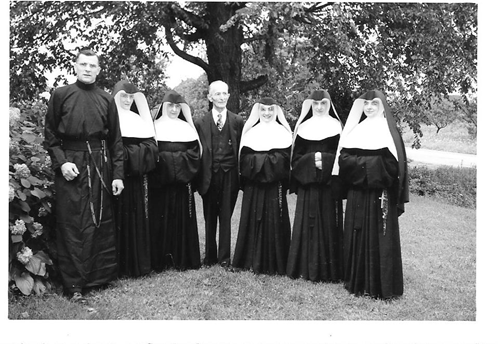 Out of the 11 children, Sister Marie Dolores and four of her sisters, and one brother entered religious life. Marie Dolores (Alma) and her sisters were vowed members of the School Sisters of Notre Dame. In addition to her brother (left) and father (center), Sister Maria Dolores is pictured here with her sisters, Amata (Maria), Eligius (Clotilda), Herbert (Loretta), and Leopold (Ottilia).  Although the photo was not dated, Sister Charlaine Fill, archivist, said it would have been before 1963, when the habits changed.

Marie Dolores was 18 when she entered the School Sisters of Notre Dame in Baltimore. She professed first vows on July 29, 1941. In 1966, she received her Bachelor of Science in Education from Notre Dame of Maryland University. Sister Marie Dolores ministered as a teacher for more than three decades in Catholic schools in Rochester, Baltimore City, Poughkeepsie, Providence and Charleston among other places. In 1972, she moved to the motherhouse in Wilton, Connecticut, where she ministered as a nurse to elderly sisters for four years and then served another 30 years in community service as a switchboard operator and organist. She currently resides in Ozanam and ministers in Prayer and Presence. Although Marie Dolores short-term memory is failing, she is still up and around and very kind to those around her.

Through additional research, Sister Charlaine was able to tell us the dates that Sister Marie Dolores’ sisters passed away. Sister Amata (Maria) died in 2009 in Wilton.  Sister Eligius (Clotilda) died in 1990. Sister Herbert (Loretta) died in 1979. Sister Leopold (Ottilia) died in 1968 at age 52.

Sister Charlaine was also able to address the carvings by Leopold Schneggenburger Alma had mentioned. “Yes, there are two wood carvings done by their father, which are both displayed in our dining room here at Villa Notre Dame in Wilton. They are not for sale at this point.” 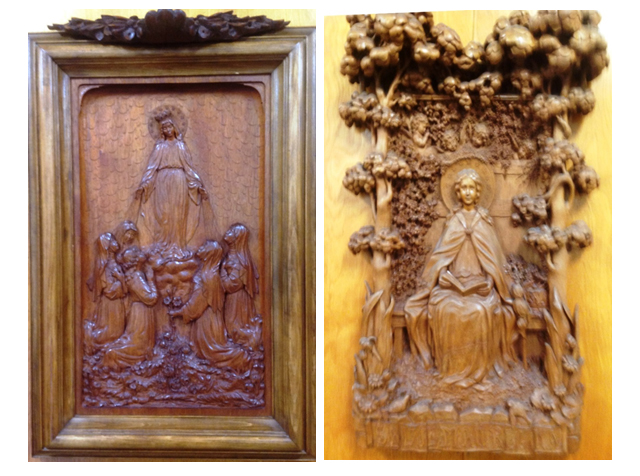 When Alma received copies of photos of the woodcarvings her grandfather had carved, she was overjoyed. “Thank you so much for all the information. I guess you figured out that I am named after Sister Marie Dolores. And to see grandpa's carvings filled my heart with joy. My favorite is of his five daughters kneeling before the Blessed Mother. I will share this information with my two remaining sisters, Mary and Martha.  I am happy that you treasure Grampa's carvings and display them. God bless you.”