A Commitment to Education 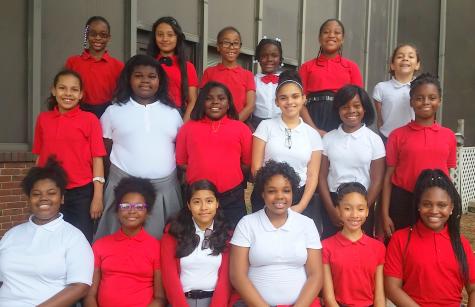 Sisters Academy opened because of the remarkable commitment of the four sponsoring congregations of religious women, the hopes and dreams of the parents of southwest Baltimore, and the contributions of generous individuals, groups, corporations, and foundations who have embraced the mission.

Sisters Academy began on September 7, 2004 with the fifth grade. For the next three years a new grade was added each fall. In September 2007, all four grades (5, 6, 7 and 8) were enrolled for the first time. The first class of 8th graders graduated on June 4, 2008, completing the foundational phase of the school.

The goal of Sisters Academy is to educate young girls who have the potential and motivation to excel in middle school, a critical time of life for them. The curriculum and program have been designed specifically for middle school girls who have the ability and desire to succeed and would not otherwise have the opportunity for an excellent education.

Caira Lee (Class of 2008) has become a “performance poet” and recently published a collection of her poems in a book entitled Slaying with No Dents in My Afro. The following is the publisher’s description of this young lady and her book. “Caira Lee finished first in Cleveland's SlamU youth poetry finals in 2011, but declined her spot on the team in order to attend another national competition: the National Endowment for the Arts' Poetry Out Loud: National Recitation Contest in Washington, DC, where she was a finalist. In 2012, she placed first in the SlamU finals again and traveled with the team to California, competing at Brave New Voices. Caira gave the commencement speech at her high school graduation after her classmates voted her Most Likely to Change the World. In 2013, she won a place on Cleveland's Lake Effect Poetry adult slam team, and competed at National Poetry Slam in Boston. She is currently studying at the College of Wooster, majoring in Political Science and Religious Studies.”