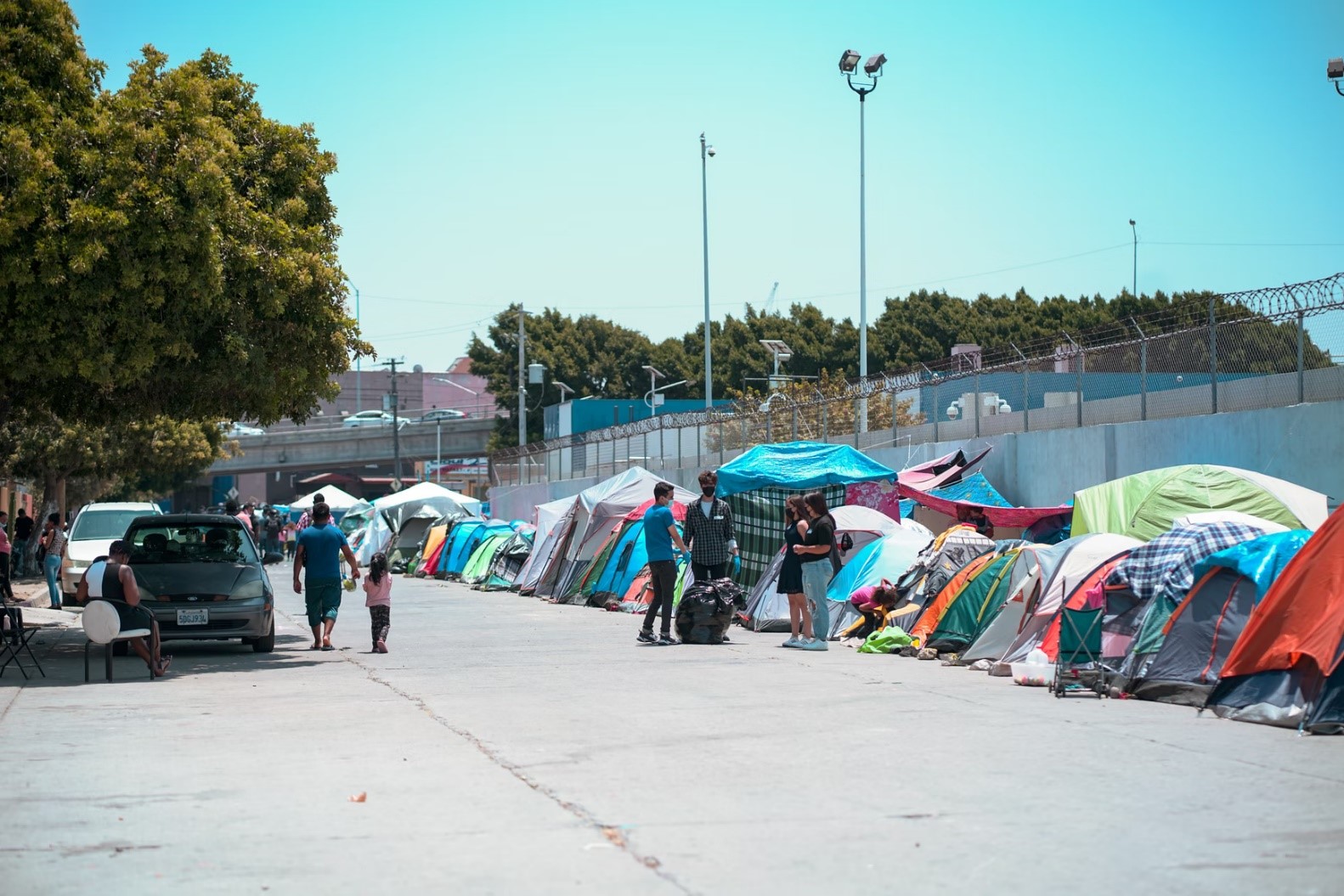 We have journeyed together this Lent, stopping along the way to reflect on our commitment to those who seek justice as immigrants. We have listened to the voices of a young man from Mexico with DACA status, to a Haitian immigrant here twenty years with Temporary Protected Status, to the journey of Afghan refugees with so little preparation, to a family torn apart and reunited in their immigrant journey, to a young mother leaving her abuelas and culture behind in Columbia. Stories matter. We are called to be Dangerous Women. As we go forward into Holy Week, we recall the pilgrimage that Jesus himself made from that procession into Jerusalem, to the Passover meal celebrated with his friends, to the betrayal by his friend, to his passion and death on the cross, to the victory of life over death in the resurrection.

We invite you to reflect on some of these images, poems, short videos, and prayers as you make space for contemplation during this Holy Week. May they be a blessing to you, to those with whom you share them, and move your spirit to join in the work of justice for immigrants. We pray with you.

Let us pray:
Jesus proceeded on his journey up to Jerusalem.
As he drew near to Bethphage and Bethany at the place called the Mount of Olives,
he sent two of his disciples. He said, “Go into the village opposite you,and as you enter it you will find a colt tethered on which no one has ever sat. Untie it and bring it here. And if anyone should ask you, ‘Why are you untying it?’ you will answer, ‘The Master has need of it.’”
So those who had been sent went off and found everything just as he had told them.
And as they were untying the colt, its owners said to them, “Why are you untying this colt?”
They answered, “The Master has need of it.” So they brought it to Jesus, threw their cloaks over the colt, and helped Jesus to mount.
As he rode along, the people were spreading their cloaks on the road;
and now as he was approaching the slope of the Mount of Olives, the whole multitude of his disciples began to praise God aloud with joy for all the mighty deeds they had seen.
They proclaimed:
“Blessed is the king who comes in the name of the Lord. Peace in heaven and glory in the highest.”
Some of the Pharisees in the crowd said to him, “Teacher, rebuke your disciples.”
He said in reply, “I tell you, if they keep silent, the stones will cry out!”    Luke 19:28-40

Reflection: Read and reflect on these thirteen images of artists in response to the issues of immigration. Take the time to contemplate the images that catch your attention, that grab your heart. Then read the two poems below about the experience of immigration.

tomorrow I leave to El Paso, Texas
see my brother-in-law with a styled shirt
in spite of his cancer below
then a small dinner in the evening the next day
no one knows except I may be on the road
Mesquite where my father settled in '31
forty-five minutes west then a left you go in
sister Sarita waits for me on Abby Street
after decades in separate families we just met
now I hear the clock snap I swipe an ant
time to walk my dogs five blocks and back
a different route to soothe the mind
it is the same one but I am hopeful     -Juan Felipe Herrera - 1948-

Home
(Hear it read by the author here.)

your neighbors running faster than you breath bloody in their throats the boy you went to school with who kissed you dizzy behind the old tin factory is holding a gun bigger than his body you only leave home when home won’t let you stay.

no one leaves home unless home chases you fire under feet hot blood in your belly it’s not something you ever thought of doing until the blade burnt threats into your neck and even then you carried the national anthem under your breath only tearing up your passport in airport toilets sobbing as each mouthful of paper made it clear that you wouldn’t be going back.
you have to understand, that no one puts their children in a boat

unless the water is safer than the land no one burns their palms under trains beneath carriages no one spends days and nights in the stomach of a truck feeding on newspaper
unless the miles travelled means something more than journey. no one crawls under fences no one wants to be beaten pitied

no one chooses refugee camps or strip searches where your body is left aching or prison, because prison is safer than a city of fire and one prison guard in the night is better than a truckload of men who look like your father no one could take it no one could stomach it no one skin would be tough enough

the cries: go home blacks refugees dirty immigrants asylum seekers sucking our country dry niggers with their hands out they smell strange savage messed up their country and now they want to mess ours up how do the words the dirty looks roll off your backs maybe because the blow is softer than a limb torn off

or the words are more tender than fourteen men between your legs or the insults are easier to swallow than rubble than bone than your child body in pieces.

i want to go home, but home is the mouth of a shark home is the barrel of the gun and no one would leave home unless home chased you to the shore unless home told you to quicken your legs leave your clothes behind crawl through the desert wade through the oceans drown save be hunger beg forget pride your survival is more important

no one leaves home until home is a sweaty voice in your ear saying- leave, run away from me now i don’t know what i’ve become but i know that anywhere is safer than here

Let us pray:
Brothers and sisters:
I received from the Lord what I also handed on to you, that the Lord Jesus, on the night he was handed over, took bread, and, after he had given thanks, broke it and said,
“This is my body that is for you. Do this in remembrance of me.”
In the same way also the cup, after supper, saying, “This cup is the new covenant in my blood. Do this, as often as you drink it, in remembrance of me.” For as often as you eat this bread and drink the cup, you proclaim the death of the Lord until he comes.    1 Cor 11:23-26

Music has the power to help us remember. My father-in-law had advanced dementia at the end of his life, and yet music brought him into the present if for a brief few minutes. Listen and remember what this time means for Christians throughout the world as “we remember, we celebrate, we believe.”

Read this article, written for the BBC Travel section, about memory and food, particularly poignant at this time as it is written by a Russian Jew. Reflect on your own memories of food, of tables shared, of tables of rejoicing and tables of struggle.
And then read this, on reimagining immigration and the influence of food on all of us.

Let us pray:
Standing by the cross of Jesus were his mother and his mother’s sister, Mary the wife of Clopas,
and Mary of Magdala. When Jesus saw his mother and the disciple there whom he loved
he said to his mother, “Woman, behold, your son.” Then he said to the disciple, “Behold, your mother.” And from that hour the disciple took her into his home.
After this, aware that everything was now finished, in order that the Scripture might be fulfilled,
Jesus said, “I thirst.” There was a vessel filled with common wine. So they put a sponge soaked in wine on a sprig of hyssop and put it up to his mouth. When Jesus had taken the wine, he said,
“It is finished.” And bowing his head, he handed over the spirit.    John 19:25-30

Reflection: In what ways and where does Jesus continue to suffer and die? Where do I stand in relationship to those deaths, those crosses? To what does God call me now, in this time, in this season, in my life and work for others?
What happens when migrants die in the Arizona desert? Read and reflect here. 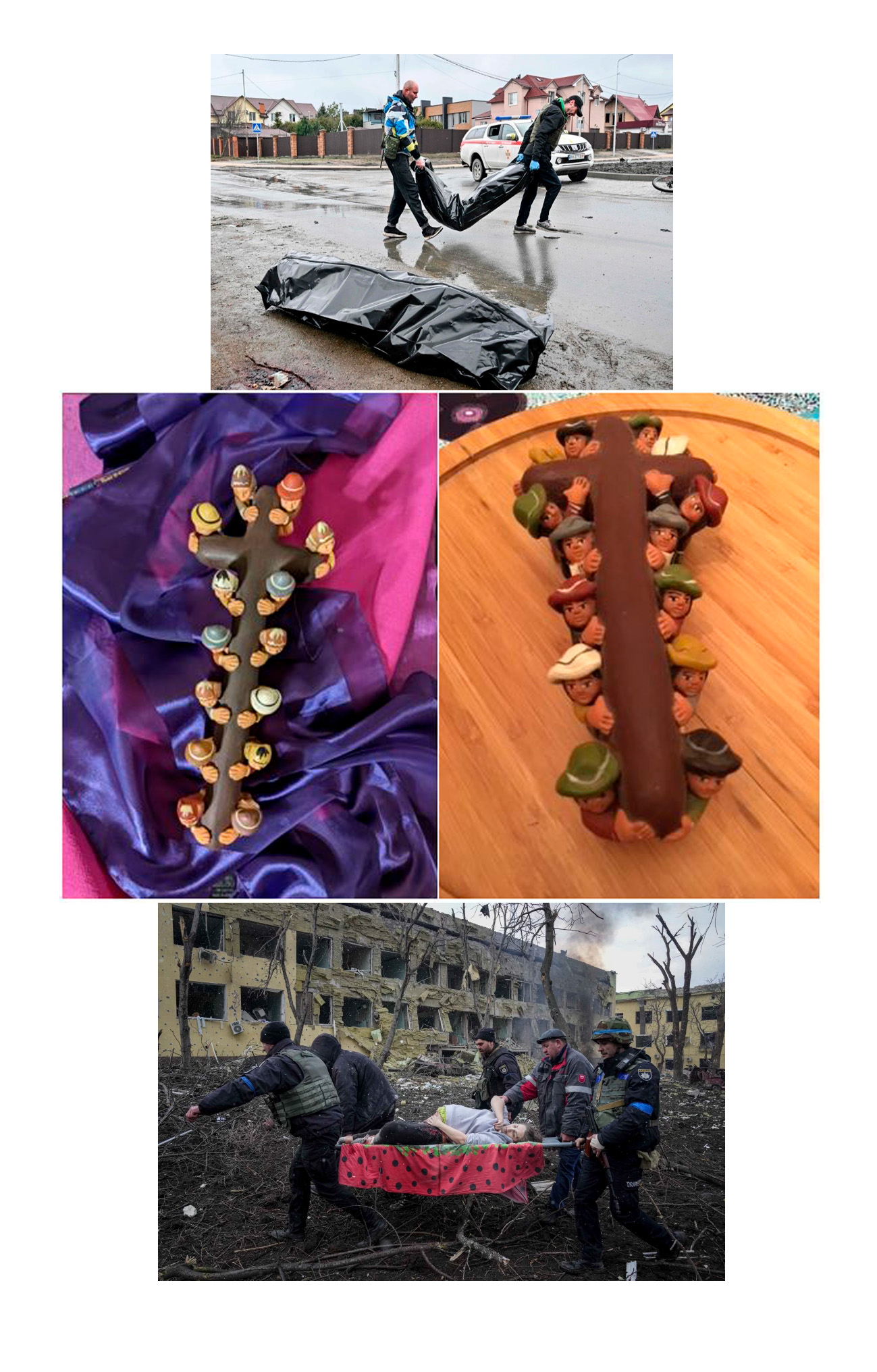 Let us pray:
At daybreak on the first day of the week the women who had come from Galilee with Jesus
took the spices they had prepared and went to the tomb. They found the stone rolled away from the tomb; but when they entered, they did not find the body of the Lord Jesus.
While they were puzzling over this, behold, two men in dazzling garments appeared to them.
They were terrified and bowed their faces to the ground. They said to them, “Why do you seek the living one among the dead? He is not here, but he has been raised. Remember what he said to you while he was still in Galilee, that the Son of Man must be handed over to sinners and be crucified, and rise on the third day.” And they remembered his words.
Then they returned from the tomb and announced all these things to the eleven and to all the others. The women were Mary Magdalene, Joanna, and Mary the mother of James;
the others who accompanied them also told this to the apostles, but their story seemed like nonsense and they did not believe them.
But Peter got up and ran to the tomb, bent down, and saw the burial cloths alone;
then he went home amazed at what had happened.            Luke 24:1-12

Reflection: “And they remembered his words.” How does my memory move me to action? To whom am I called to “announce all these things” in this time, in this season, at this point in my life, even at the risk that it will “seem like nonsense”? With whom might I share my concern for justice for immigrants? Read here about the demographics of women and immigration (2020) from the American Immigration Council. Read how migration is a gender equality issue here.  How will I tell the story to others? With whom should I share it?

Action/Advocacy: Commit to at least one action a month that advocates for justice for immigrants. Imagine the power of SSND if everyone did this! Dangerous women, go make a difference!