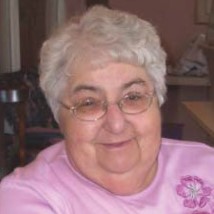 Sister Gertrude died on August 23 at Notre Dame Convent, Waterdown, Ontanrio Canada at the age of 89. She had enjoyed her 70th Jubilee celebration with the Notre Dame community on July 5.

Gertrude was the last of 10 children born to her parents Simon and Anna (Buchheit) Huber. The family lived on a farm in the village of Bamberg. She attended the rural school in Bamberg for her elementary education. Gertrude received religious instruction and sacramental preparation by the School Sisters of Notre Dame in St. Clements. She attended St. Clements School for Grade 9. Inspired by the Sisters, especially Sister La Salle Englert, superior and principal, Gertrude felt a calling to religious life.

Gertrude entered the candidature in Waterdown in September 1947. During the
following two years she continued her high school education. On August 1, 1949
she was received as Novice Mary La Salle and professed her vows in 1950.

Sister Gertrude took several educational courses offered by the Ontario Ministry of Education. She attained her B.A. degree in 1972 from St. Jerome’s College, University of Waterloo.

From 1975 – 1978 Sister Gertrude worked in food services in Waterdown and later was house mother at St. Agatha Children’s Village.

In 1978 she moved to Thunder Bay where she took an addiction counselling course which qualified her as an addiction counsellor at St. Joseph Treatment Centre in North Bay. In this position she was involved in all aspects of the treatment program. As well, she coordinated the Family Program designed to aid family members affected by alcoholism.

In 1981 Sister Gertrude moved to Toronto where she was counsellor at Pedabun Lodge, a drug and alcohol rehabilitation center for aboriginal men and women. In addition, she coordinated Alcohol Anonymous retreats. While in Toronto she took a three year addiction counsellor program at George Brown College. For her field work she worked at the Good Shepherd Hostel where a significant percentage of clients were aboriginal. Later, this became her full-time ministry.

In 1986 Sister Gertrude moved to Pine Point, Northwest Territories where she was catechist at St. Thomas the Apostle Parish until the closing of the lead/zinc mine when residents left the town. Sister Gertrude then went to Fort Resolution in 1988. There she taught religion and became assistant parish administrator for St. Joseph Parish.
Due to ill health Sister Gertrude moved to Notre Dame Convent in 1991. She engaged in various aspects of community service, including assistant to the local leader for the Marian community.

In 1997 for a brief period she was able to participate in parish ministry at St. Ambrose Parish, Cambridge until 1999.

During her years of limited mobility and failing health Sister Gertrude maintained her sense of humour.  In addition to painting, she enjoyed card games, jigsaw puzzles and playing games on the computer.

Mass of Christian Burial was celebrated at Notre Dame Convent, Waterdown on Wednesday, August 26. Only community members were present. Family and friends joined the sisters for the interment at Gate of Heaven Cemetery, Burlington.