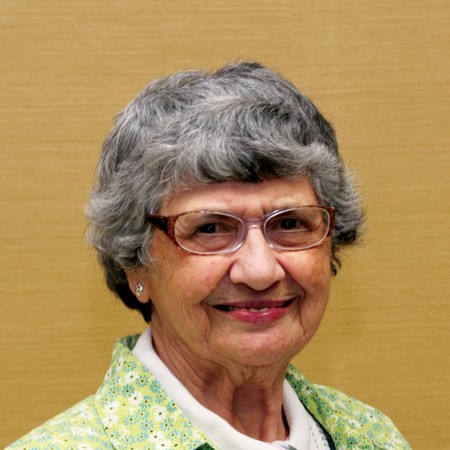 A native of Brooklyn and longtime pastoral minister on Long Island, Marie Irene Scarola was the second SSND to go home to God at Ozanam Hall in Queens, NY. She died on January 13. Irene, born on August 28, 1924, was the third child of Lorenzo Scarola and Irene Lanzolla Scarola, immigrants from Italy. Baptized Antoinette at St. Patrick Church, she grew up in Brooklyn and attended St. Anselm School. Her father always insisted to her teachers that the name was pronounced Antoinet-TA. The family was completed by two sisters and two brothers.

The SSND Aspiranture at Holy Angels Academy in Fort Lee, N.J. was the scene of her high school years; Antoinette had known in 7th grade that she wanted to be a sister. She entered the Candidature at Aisquith Street in Baltimore on her birthday in 1942. Two years as a Candidate and one year as a Novice led to her profession of first vows on July 31, 1945. Final vows followed six years later in 1951. At Reception she had received the religious name Marie Irene.

For the first 17 years of her ministerial life, Sister Irene taught at St. Mary, Washington, DC, for one year; Our Lady of Mount Carmel, Poughkeepsie, NY, eight years; and Mt. Carmel Elementary, Camden NJ, eight years. She then spent the next six years at St. Boniface in Philadelphia, the last three as Principal. She was again a teacher at Mt. Calvary in Forestville, Maryland, before moving to Notre Dame Prep School in Towson, Maryland, as teacher and guidance counselor.

Of those 27 years of teaching, Irene wrote, “I must say I loved every place and learned something new in each place I was missioned. Sometimes we didn’t all agree, but if we could talk about how we saw things, we could reach an understanding.” In 1957 she earned a B.S. in Education from Villanova University; and in 1967, an M.A. in Counseling/Guidance, also from Villanova.
At various schools in several locations, she continued to take courses, among them counseling, death and dying, bereavement, child development, Catholic Social Teaching, and especially Post-Vatican II Scripture and theology.

In 1972, “came a wonderful second career” for Sister Irene, who described herself as “never afraid of a challenge. That led me to varied and rewarding ministries.” She wrote,

A pastor in Florida contacted the Baltimore community
leadership asking for sisters who could help his parish,
Christ the King in Tampa, meet the needs of his parishioners.
I was given this information and met with the pastor and
was hired for a year to explore possibilities for a ministry
and outreach program. This included home visitation,
hospital ministry, bereavement counseling, and adult education.
I Ioved setting up this program, and my recommendations were
well received by the pastor and parish.

Irene began her service by visiting homes for the parish census, and this personal contact became an essential part of her pastoral approach because it said to people that the parish was concerned about them. It was also a way to discover the isolated and lonely. She listened as each parishioner shared whatever she/he wished, whether it was to vent angrily, question, or express appreciation. Her final recommendation to the pastor of Christ the King was that two sisters, and perhaps a brother, be hired to carry out this new vision of how a staff working collaboratively could revitalize a parish in the spirit of Vatican II.

After this year, Irene moved from Tampa to Long Island, where she carried out the program at St. Patrick Parish in Bay Shore for the next eight years. She proved to be a superb parish minister. Everyone who worked with her described her as multi-talented, a self-starter, capable of doing whatever she concentrated on, able to work well with others, an excellent manager. In every parish she was conscious of the needs of the poor.

One pastor wrote, “She has the wonderful quality of ‘sparking’ the sensibilities of those around her . . .  She is rather keen on women’s rights, being well attuned to contemporary rhetoric on the subject, but most impressively is charitable toward all….Combining the traditional and the contemporary with neither confusion nor contradiction is quite an accomplishment.”

From 1973 to 2000, Irene served as pastoral minister at various parishes on Long Island: Our Lady of Loretto, Hempstead; St. Elizabeth, Melville; Sts. Cyril and Methodius, Deer Park; and Cure of Ars, Merrick. Always in her service the accent was on the spiritual. “I am so happy in the Faith myself!” she is quoted as saying in the Bay Shore parish newsletter, “If I can share my joy with the parishioners it is worth the effort.”

Sister Irene spent her last ten years of service giving family and community service at St. Raphael Convent in East Meadow. She came to Villa Notre Dame in July 2012, and went later to Lourdes Health Care Center.  In September 2019 she was among the first group of SSNDs to move to Ozanam Hall In Bayside, Queens, where she died on the evening of January 13.

A vigil service was held at VND on January 15, at which Sister Nancy Gilchriest presided. Nancy remembered that Irene always knew that she was the beloved of God, and that this was the source of her joy and energy. Her 92-year-old sister, Mary, came from Maine. Her nephew Tom McDonnell led the family in eulogizing her; then other nephews, grandnieces and grandnephews also spoke lovingly and humorously of her influence on their lives. Mary ended the reminiscences by remembering another side of Antoinette, emphatically  stressing what a tomboy she had been during their high school years.

VND Chaplain Father Tom Elliott, CSC celebrated the Liturgy of Christian Burial on the morning of January 16.  Again Mary and several other members of her large and loving Italian family joined the community.  Burial followed at St. Mary Cemetery in Bethel, Connecticut.