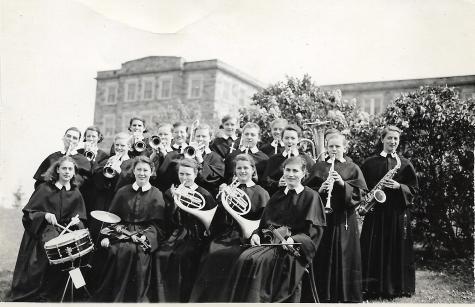 With a starlit sky above them, three sisters, ten candidates and 22 aspirants and boarders arrived at the new Canadian Motherhouse on February 14, 1927.

A statue of Our Lady of Grace, aglow with light high above the front balcony, was there with arms extended in welcome. At the front entrance stood the smiling Mother Baptist Klein, Sisters Othwina Tiefenbrun, Hilda Lienhardt, Humberta Schmitz and Pontia Diebolt. The group was led to the chapel where the first community sang, “Holy God We Praise Thy Name”.

Less than ten years later, Mother Stanislaus Koska Schilling, Commissary General in North America, wrote,“ for some time we have been considering forming a Canadian province. The growth of the order in Canada warrants this.” There were 19 missions in Ontario with 123 sisters -, 67 of whom were Canadian and 56 from United States or Germany.

Land was purchased for the motherhouse within the picturesque Niagara escarpment and near to Hamilton Teachers’ College. Mother Baptist and Sister Othwina were given charge of overseeing the construction.

The new motherhouse was home to the newly elected Provincial Council, young women in formation, sisters attending Hamilton Teachers’ College and those who taught in schools in Hamilton.

The bus which took the sisters to the various schools returned with day students who attended Notre Dame Academy. Bedrooms accommodated 40 boarders from nearby cities and various countries. Local children attended elementary classes until St. Thomas School opened in 1951.

Until the late 1950’s the sisters were fairly self-sufficient, farming 196 acres of farm land, woodland, and orchards. The farm, vegetable gardens, and a variety of fruit trees provided for the sisters and the boarders. On the east side of the convent is a path leading to a statue of the Blessed Virgin Mary. Further on the path is the pavilion. Behind it is a gully which leads to the beautiful Waterdown Falls. In the early years hiking down the gully was a favourite activity.

In 1956 a chapel was erected at the rear of the building. It was constructed of entirely Canadian materials- wood, marble and stone. Beneath the chapel was a spacious gym with a large stage were particularly useful to academy students.

In 1964 the Villa wing was added on the west side. The third floor was an infirmary for the sick and elderly. Individual bedrooms were on second and fourth floors. A bowling alley in the basement was a popular place for sisters and students.

The much loved Notre Dame Academy transitioned into the Notre Dame Centre in 1983, offering accommodation for conferences, workshops and retreats. Eventually Montessori set up classes in 1990 and in 2000 a pre-fab school was built on the former baseball diamond. In April1993 S.A.M. – Seniors Activation Maintenance program -brought in seniors for daytime enrichment and activities. Both Montessori School and S.A.M. continue to operate on the premises today.

By the mid 1990’s the Notre Dame Centre was not being used to full capacity. The Villa wing with the infirmary and the rooms for senior sisters no longer seemed adequate. With an increasing number of sisters retiring, it became apparent that a home for senior sisters was needed.

After much consultation and dialogue it was determined to renovate the motherhouse as a home for senior sisters. The solid structure of the original building proved to be preferable for renovations rather than the 1964 Villa wing. Renovations began in March 1997 and continued through to July 1998. The third floor is now a state – of- the art health care facility with additional services to those on fourth floor. The Villa wing was razed in 1999 and replaced by the beautiful Jubilee Garden in 2000.

Although Notre Dame Convent commands a view of the waters of Lake Ontario and a panoramic view of the city of Hamilton, Burlington Bay and the Niagara Escarpment, it most importantly continues to be a HOME - home to vowed religious who in their senior years live in a prayerful atmosphere. In earlier years it was a home for young women who were in their formative years in becoming a School Sister of Notre Dame. Through the years it was a home to students of Notre Dame Academy. Countless girls attribute their years at NDA as being their most influential years, giving them a sense of stability and security, and imparting a life of faith.

On July 14, 2012 the Canadian province, in its 85th year as a province, integrated with the Atlantic- Midwest province