“We cannot tolerate or turn a blind eye to racism and exclusion in any form and yet claim to defend the sacredness of every human life.”  Pope Francis addressed these words to Catholics in the United States shortly after the death of George Floyd. Subsequently, in light of these events and developments in our country, the AM Province, as an institutional investor, and in relationship with the Investor Advocates for Social Justice, is called and committed to do more to address racial equity.

Initially, the AM Province, the Central Pacific Province, and numerous other religious congregations of women and men, joined financial providers in signing the Investor Statement of Solidarity to Address Systemic Racism and Call to Action. As a community of investors, we committed to actively engage with and include Black voices in investor areas and company engagements, taking direction and guidance from their expertise and lived experience.

This also included a commitment to embed a racial equity and justice lens into our own organization by ensuring diversity in hiring and compensation, by engaging with stakeholders of color to inform our work, by hiring financial managers and consultants of color, and by ending business relationships with entities that further white supremacy. 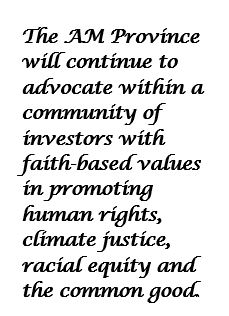 The AM Province will continue to advocate within a community of investors with faith-based values in promoting human rights, climate justice, racial equity and the common good. We will acknowledge structural racial inequity as seen in the following realities. The median Black family in the US has about one-tenth the wealth of the median white family; this affects women hardest of all; and stock ownership is also predominantly white. 60% of white US households hold stocks, which is double that of Black US households. 60% of white families also have at least one retirement account, while only 34% percent of Black families do.

“[School Sisters of Notre Dame] are attentive to God’s call, ready to do whatever [God] tells us,” revealed to us in God’s word; “through persons: through the situations of life, the church and the world; and by [God’s] movements in our hearts.” (YAS, C 19) Since the 1990s, Ariel Investments has been one of the managers for the SSND Cooperative Investment Fund.

Ariel was founded by an African-American man who became interested in the stock market when he received a gift of several shares for his 12th birthday. Today 37 years later, he and an African-American woman are the co-CEOs of Ariel with a diversified board and staff.

The AM Province along with other faith-based institutional investors will hold corporations accountable for how their policies and practices impact people of color by filing shareholder proposals, participating in company dialogues, interacting with asset managers, and addressing the perspectives and expertise of people of color, especially Black people.  Faith-based investors have been inspired to question: Who manages our money?  In what do they invest? How do they consider racial justice? Does our proxy voting support racial justice?

Congressman John Lewis once said, “Do not get lost in a sea of despair. Be hopeful, be optimistic. Our struggle is not the struggle of a day, a week, a month, or a year; it is the struggle of a lifetime.  Never, ever, be afraid to make some noise and get in good trouble, necessary trouble.”